This is actually a sample

This post didn’t start as anything I’d ever publish. I just opened a New Post so I could have a place to try typing on different laptops. The bits of typing from the Microsoft Store, the Apple Store, and the CSULB Computer Store, just all wound up here and suddenly a typing sample turned into a post. And the purchase of a new Mac! When I switched from Mac to PC a few years back I thought I’d never buy another Mac. But wow, slim MacBooks like the Air, or the new 12″, kind of slay MS Surface.

When I walked into the Microsoft Store at South Coast Plaza in Costa Mesa, CA I already knew I was going to buy an MS Surface. I hadn’t really played with them much, but I’ve been aware of them since the product was launched in June 2012.

I’ve got a couple of iPads and an awesome Samsung tablet. And sure I like to use mobile apps. But I really like working on WordPress. I got a cool bluetooth keyboard for the Samsung. And a little stand for it. But instead of carrying around Tablet & Stand & Keyboard, I thought maybe I’d just get a Microsoft Surface already. The magnetic soft cover/keyboards seemed so cool. So perfect.

Well, I couldn’t type on any of my websites in the Microsoft Store. Again, really not Surface’s fault. But still a poor experience. And while Surface’s cover/keyboard was sort of cool, and the kickstand in the back was sort of smart, all the moving parts started to seem just a bit clunky. Like Surface was working so hard to turn a tablet into a laptop. Kind of like I had done with the Samsung and the keyboard and stand.

This is Isabelle, she was on the 12″ MacBook at the CSULB Computer Store. (aka “look, I uploaded something!”)

I was recovering from bronchitis and I really didn’t want to walk all the way across that damn skybridge to the South Coast Annex to visit the Apple Store. I don’t even buy Apple products!

But Surface was a little clunky. And firewalls make for a frustrating user experience even if they aren’t Surface’ fault.

Since I don’t buy Apple products, I hadn’t really paid attention to whatever the latest crop was. I knew from a few years back that Air was ridiculously sexy and portable. I liked the 13″ and I really liked the 11″.

To be fair MacBook Air is more money than a nice Surface 4. And a lot more money than the older, and smaller, Surface 3 that I wanted to buy. But damn! So much sexier. It’s really an elegant machine. Instead of all that flipping down and out, just a single, smooth hinge. Instead of boxy construction with sharp corners, sleek curves that meet seamlessly.

I’ve been disappointed by some of aspects of John O’Nolan’s Ghost blogging software. In his inspiring Kickstarter pitch video he said Ghost would be targeted at users, not at developers. Yet 3 years down the road it’s still a lot fussier to install and work with than WordPress. Once configured, Ghost is easy, and inspiring. Like the MacBook, using Ghost is simple and elegant.

I couldn’t log in to any of my sites at the Microsoft Store, but I did manage to login to a WordPress.com site, so I typed there. And over at the Apple Store where I could load any site I wanted, I loaded this Ghost site.

I typed a little.

WordPress is an awesome platform. For me there is no greater Open Source success.

I’m not a fan of visual editing, I find it too sloppy. Text mode is ok, but the HTML tags quickly obscure what you’re trying to say. For me, Markdown is the perfect middle way. I’d love Markdown even if Blake Irving had written it. The fact that he didn’t, and that Aaron Swartz was a core developer of Markdown, that just makes writing in Markdown that much sweeter.

Between all those websites, I publish something somewhere almost every day. I write in Markdown. I license with Creative Commons. I syndicate with RSS. The late, great Aaron Swartz touches my life and work three times every single day.

Writing in WordPress on Microsoft Surface wasn’t bad. Writing in Ghost on a MacBook Air was an elegant experience. I walked into the Microsoft Store ready to buy a Surface to write WordPress with. I walked out of the Apple Store with a MacBook and the dedication to write in Ghost more often. 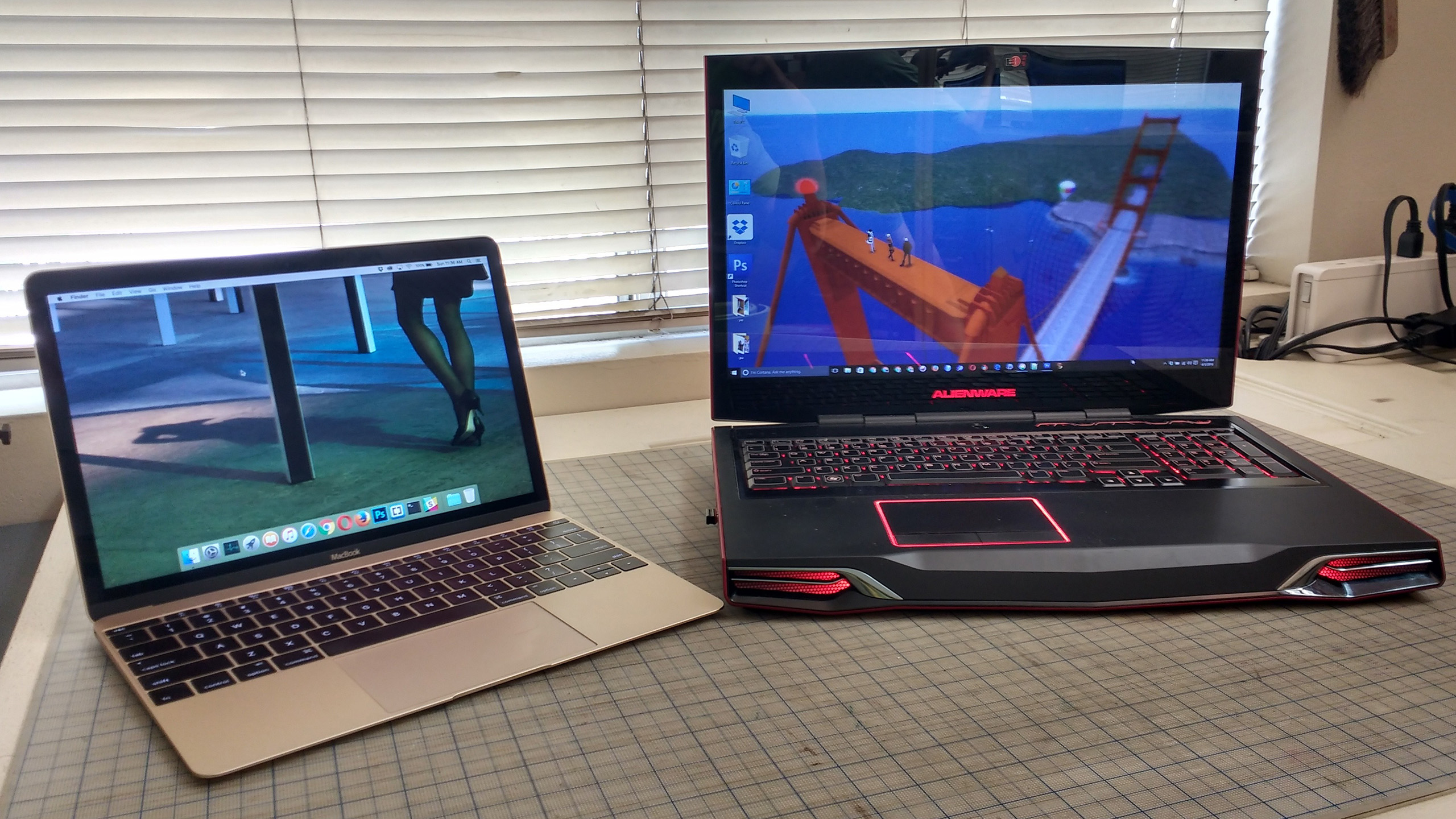 My new 12″ MacBook with my somewhat larger 17″ Alienware

Oh, and then I looked at the 12″ MacBook (released 10 April ’15). Apparently Apple is on the way to dropping the “Air”, but the 12″ MacBook is way more Air than the 11″ MacBook Air. It’s got a bigger screen, but a smaller case. And it weighs less.

The 12″ MacBook has the weakest processor of all MacBooks. The really helpful guy at the Apple Store called it an overglorified iPad since it has the same processor. But for me what matters most is that it’s a real computer with a real OS, not a mobile device. And I’ve already got the 17″ Alienware laptop with the turbo Nvidia GeForce card, so this machine isn’t about power, it’s about elegant portablilty.

The 12″ MacBook is 2 or 3 times the price of the Microsoft Surface I originally wanted. But so much finer an experience.

My bronchitis-recovering self was tired. I had some fish tacos at Wahoo’s. Rubio’s is nice. Like Surface. But really, Wahoo’s is another level of fish taco. Like the 12″ MacBook.

Oh, and the nice Apple Store guy had a cool suggestion. Instead of the eighty dollar Apple adapter to get the 12″ MacBook to talk to HDMI for presentations, or a cheaper third party adapter, why not just get the $150 AppleTV so you can give your presentations wirelessly and roam the room while you talk as (if you’re me) you know you want to do!

And now I’m at the CSULB Computer store on the 12″ MacBook. I really like it. The 11″ MB Air is over. MS Surface is so over!

Best Buy is the Best Buy

Oh, just to be poetic I said

But to be more precise, here is some pricing info for the 12″ MacBook:

I’ll let you draw your own conclusions as to where I bought my 12″ MacBook.

And Yet Moar Typing!

I’m just doing a little more typing here. Just to type. And stuff. Type. Type. Type. This is me typing. What do you think? Pretty exciting, right? Right!

Oh, so now that I actually bought the 12″ MacBook, I can say that you do get used to the very shallow key movement very quickly. No big deal at all. I probably type faster on my Logitech keyboard, but the MacBook is great.

And did I mention you can edit an .htaccess file and FTP it to a web server from this tiny laptop? No doubt you can do that from a phone too, but I’d be nervous about screwing something up. Cutting and pasting and tiny keyboards and one misplaced character and now the whole site is down.

While Ghost & WordPress are both great with the constant autosaves, when I was having connection issues at mom’s house, I wound up losing a short Ghost post I’d written but couldn’t save. WordPress also does local cache when your connection is down or you’re working offline. These days that isn’t often needed. But when it is, you sure are grateful. Or disappointed.

Type, type, type. This is me, pretending to take notes. How fun! 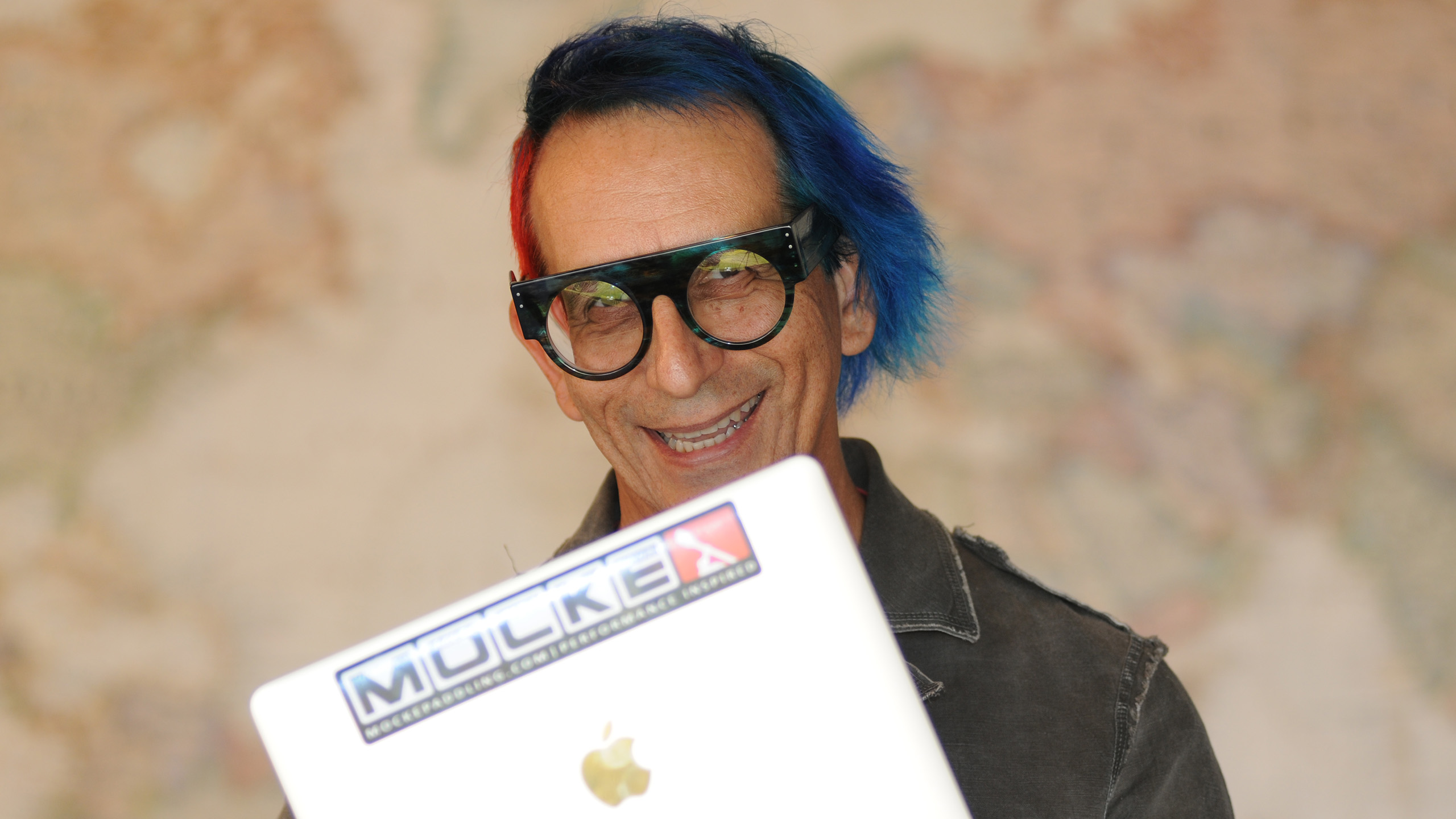 Me, with new MacBook. Nice.

Bookstore Blues On the first day of Spring 2020 s