Five years ago Tehran-born Mahsa Soroudi married Mohsen Vafa. A week later they left Iran. First a year in Malaysia, and now the last 4 years in the United States. Three-and-a-half of them in Newport Beach, CA: 50 miles southeast of Downtown Los Angeles, and 7,500 miles west of Tehran. Sometimes her mom would call and say things like

You’re not going to school, you don’t have a job, and you’re not pregnant – what are you doing?

Feeling nostalgic & homesick, Soroudi came to think that she’d never truly settle in the United States. She tried to grow houseplants, but felt too lethargic to water them. The plants did not do well.

But after a time, some plants, especially the hearty and drought-tolerant succulents, decided to do well in spite of Soroudi not doing so well. Seeing how they handled displacement and chose to grow new roots anyway, Soroudi found herself inspired by her plants. Perhaps she too became drought-tolerant for the cultural and emotional drought of being an emigre. 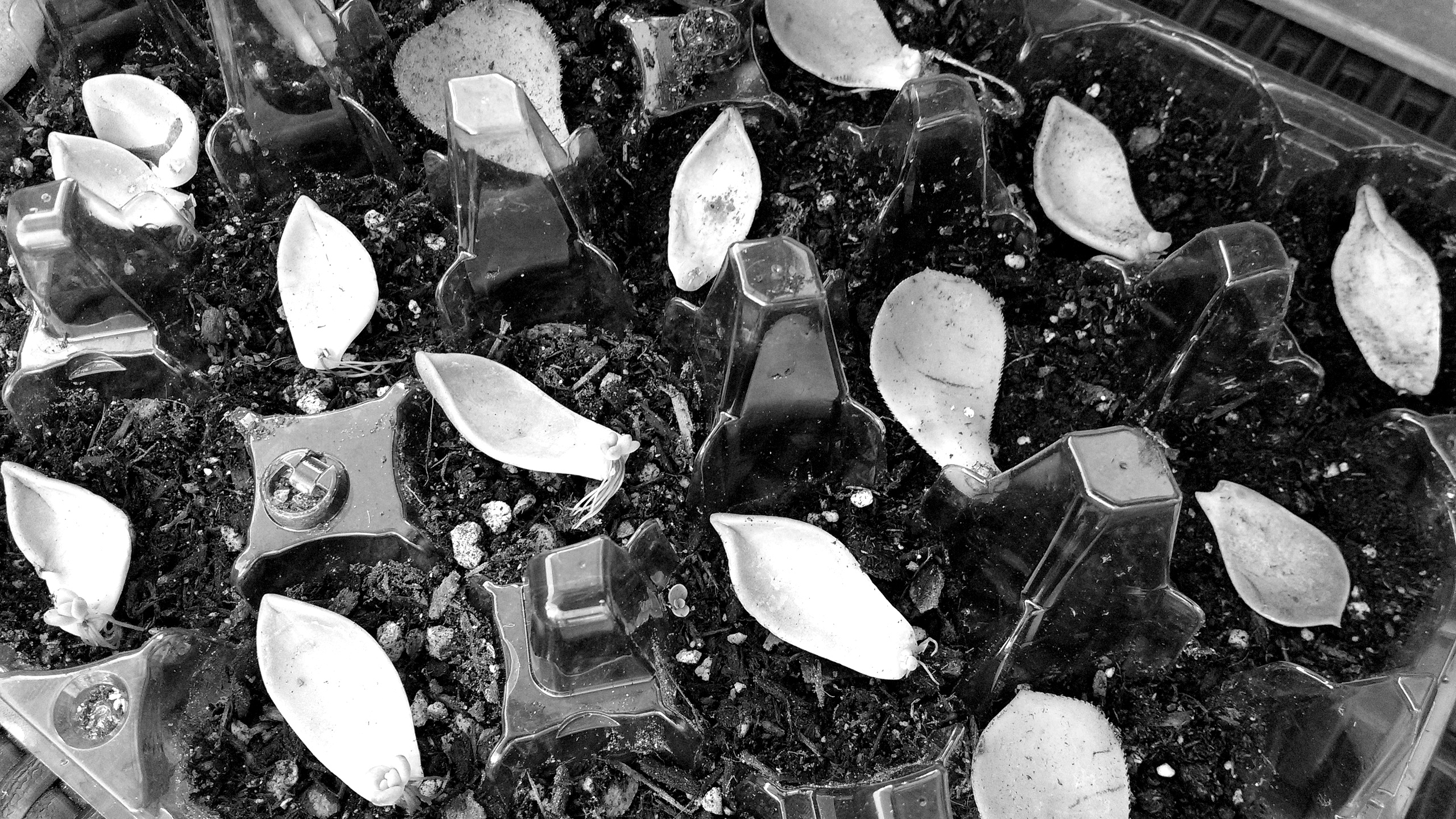 If you’ll notice the leaf near center, it’s started to drop some tiny roots toward the soil, and to sprout a few tiny buds toward the sun.

Soroudi explained that these succulent leaves in soil would grow roots and the body of a new plant. Interestingly the leaf that starts the whole process does not become a part of the new plant. It carries and spawns the genetic material, but ultimately the new plant uses the old leaf for food. What a metaphor for the immigrant experience!

My dad’s parents, Sarah Dukelski & Sam Zucmanski, emigrated from Russia a century ago. They were Polish Jews who later met and married in Philadelphia. I think a century ago it was a time of assimilation. The mid-twentieth-century was uniquely a time of American identity and optimism. And if you know anything about the plight of Jews in early-twentieth-century Russia, you might not be surprised that when my mom would ask her new mother and father-in-law about their life in Russia, they would only say,

That was the past. We’re Americans now.

Today I teach students (4,431 in the past 11 years at CSULB) with heritages from around the globe. I think there definitely still is a degree of assimilation. But I also think people who’ve immigrated in times more recent than my grandparents have often wanted stronger ties to their diaspora.

I’ve also hosted CouchSurfers from 58 different countries in the past year. One Sunday Sagar from Pakistan, Aylar from Turkmenistan, Jimmy from Honduras, Mehdi from Algeria and Yin Chien from Malaysia were sitting in my living room. They took turns giving talks about their country. Each used their smart phone as an audio-visual device to illustrate their talk. And at some point in the talk, each pulled up a photo of someone in the traditional dress of their country.

I couldn’t help but notice that as Sagar, Aylar, Jimmy, Mehdi & Yin Chien showed these images of ethnic identity on their supercomputing smart phones, they were sitting in a California living room, and all were wearing denim pants and t-shirts screenprinted with rock bands or similar graphics. I asked if they felt more in common with that indigenous person, or the 5-country, 3-continent global culture sitting in my living room. 3 answered global culture, and 2 said the indigenous person. I also noted that all 5 spoke good English, and while they probably weren’t rich, they did have access to global travel.

When Bauyrzhan & Aidana from Kazakhstan were here, I asked what they thought was the biggest factor in identity: age? geography? income? Zhan said without a doubt it was education. 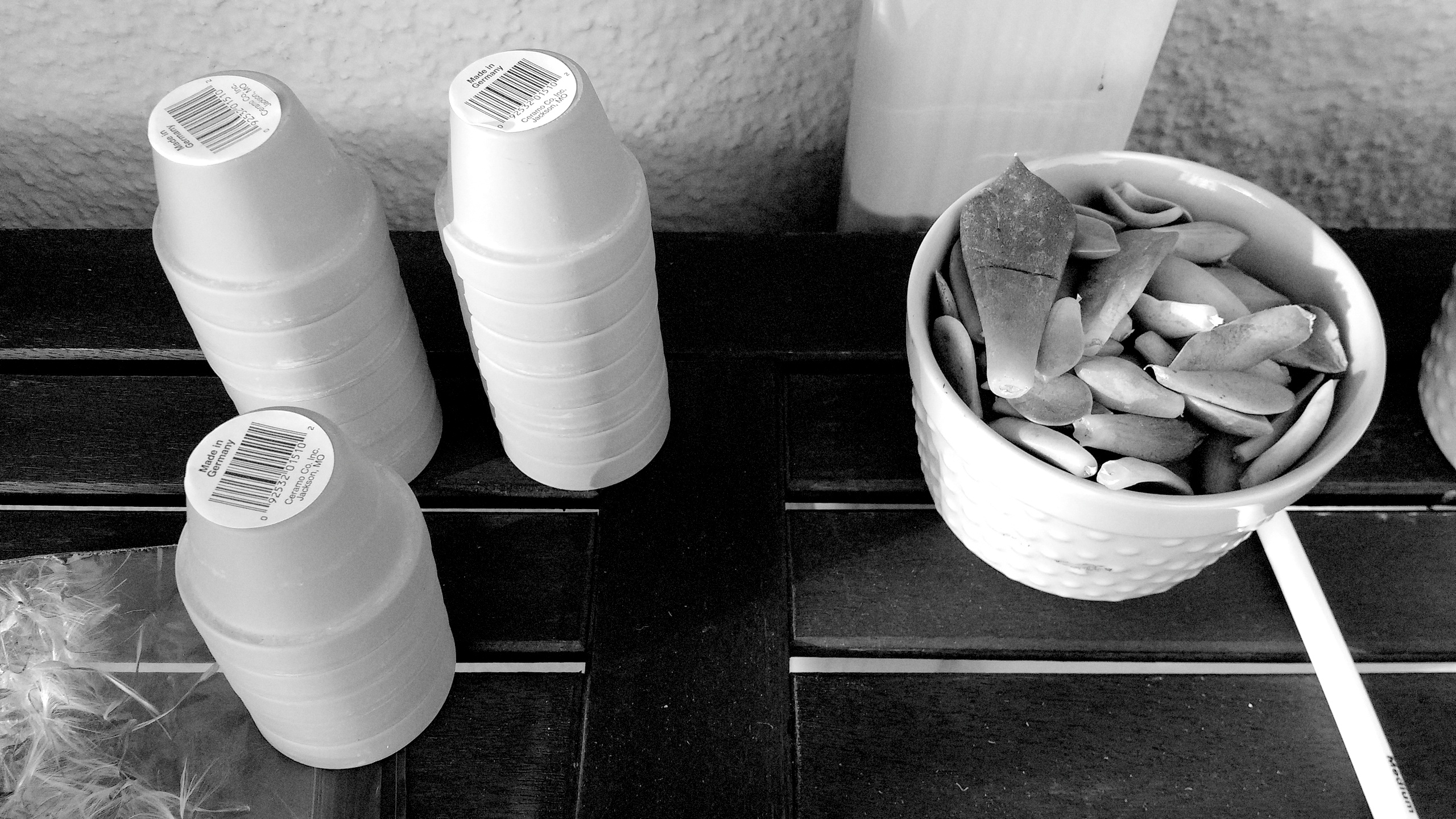 The “Activity Station” at Mahsa Soroudi’s reception for Nature’s Cadence. 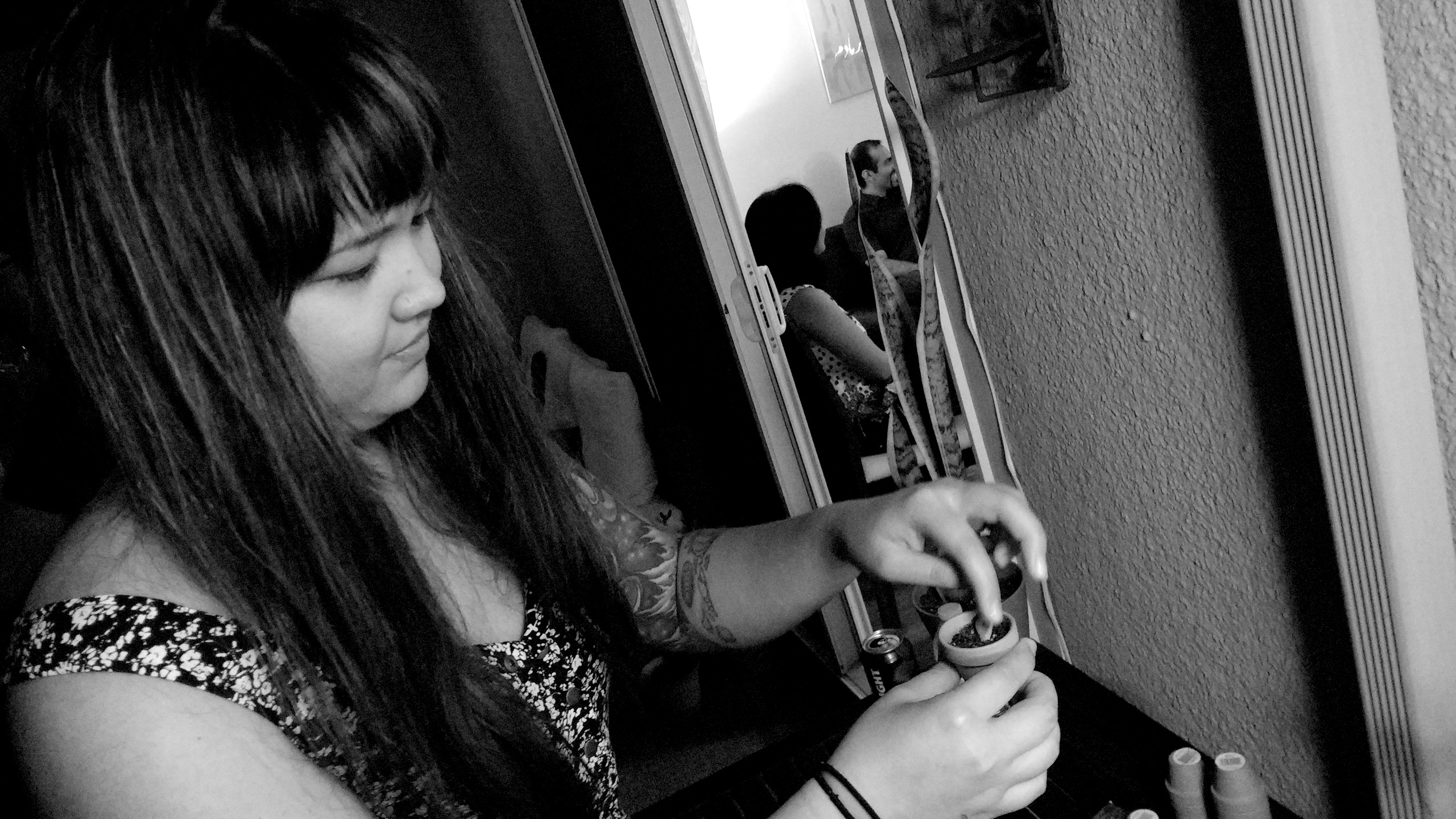 Alyssa Arney at the Nature’s Cadence Activity Station, placing a succulent leaf and soil in a tiny terracotta pot. 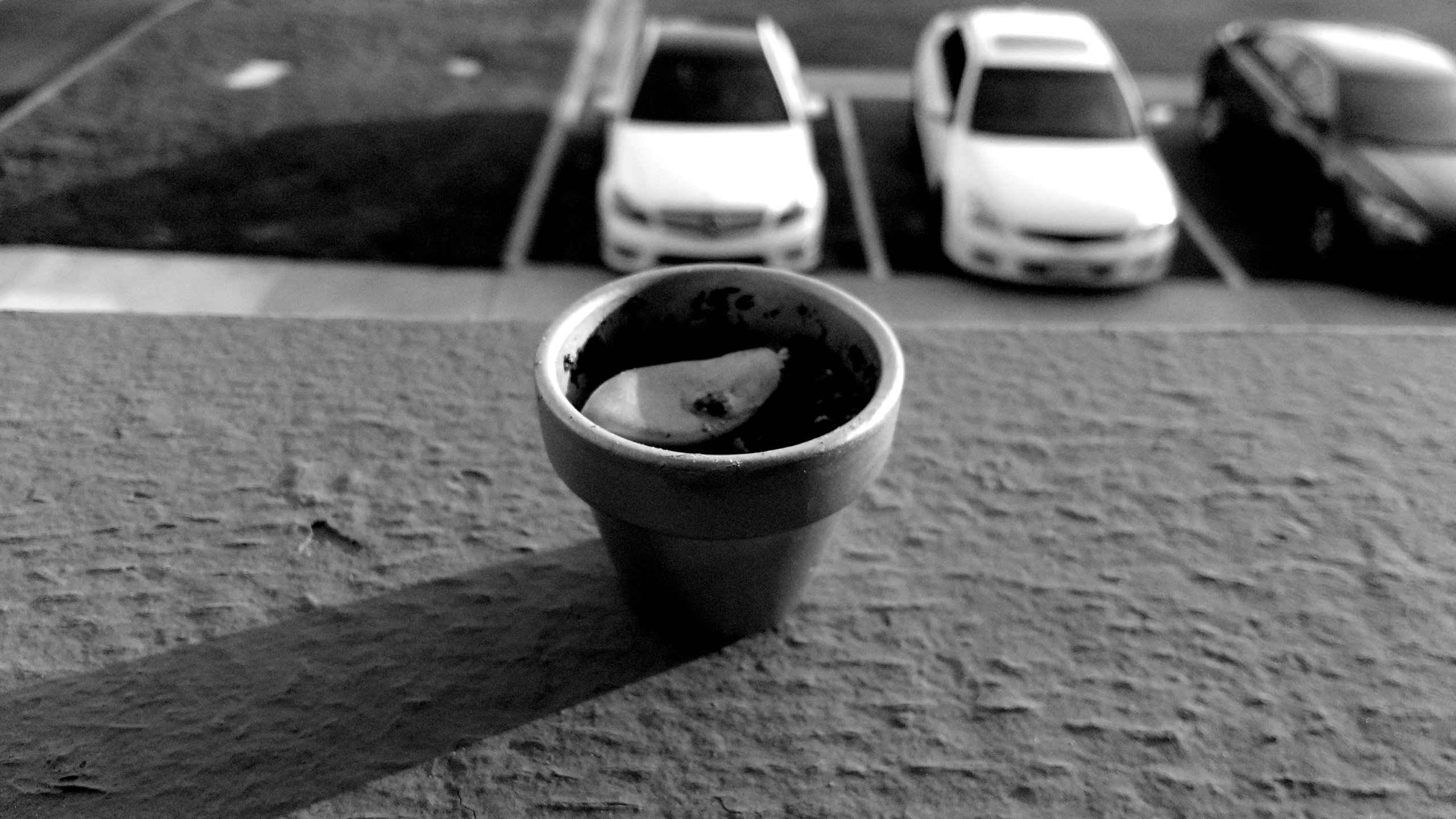 My Activity from Nature’s Cadence. You probably can’t tell in the black-and-white photograph, but I got the tiny terracotta pot that Soroudi had painted gold. 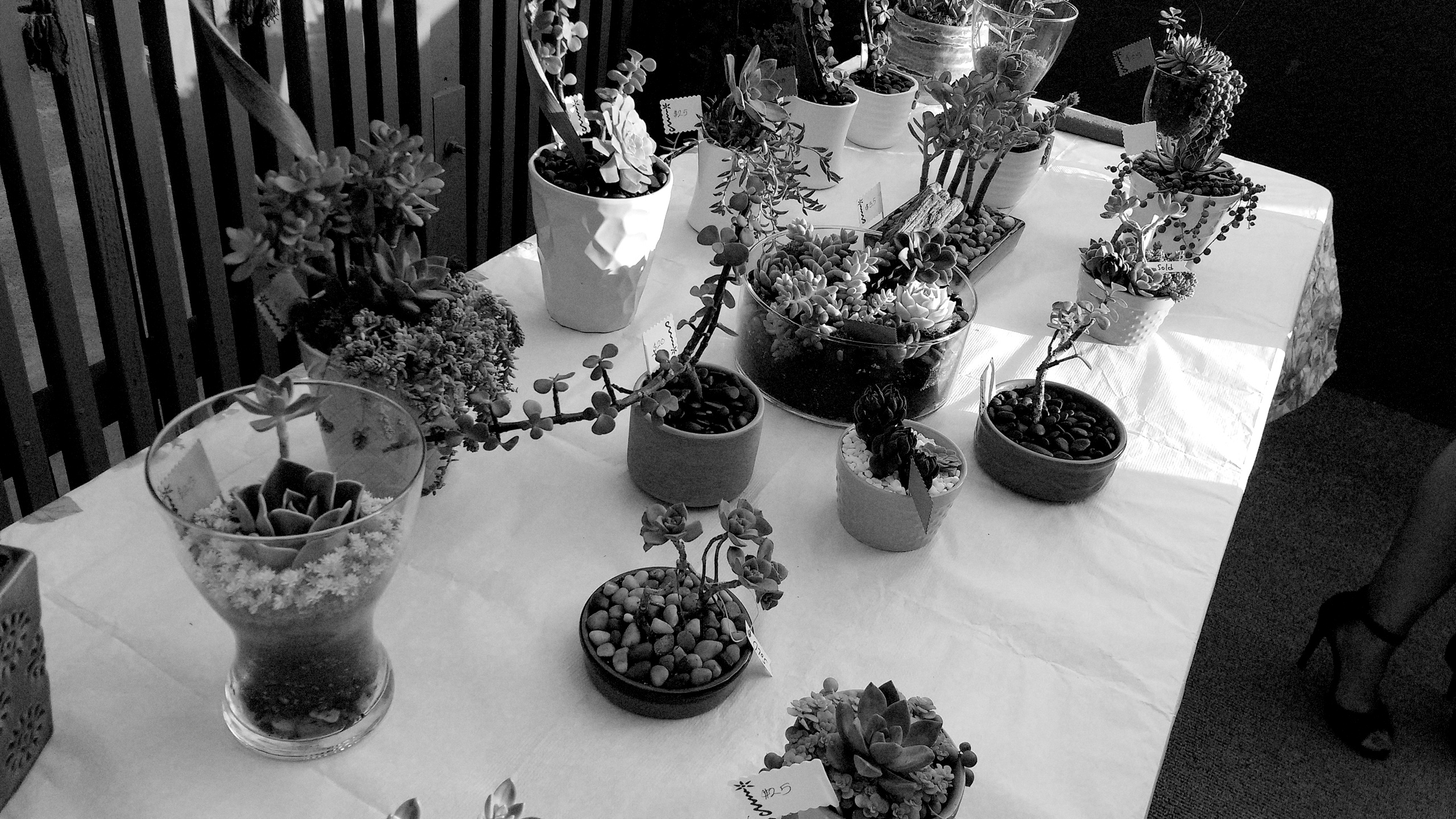 Delicate and sublime arrangements Soroudi made for Nature’s Cadence. Also, in the lower-right is one of Soroudi’s feet in her strikingly ascending heels. 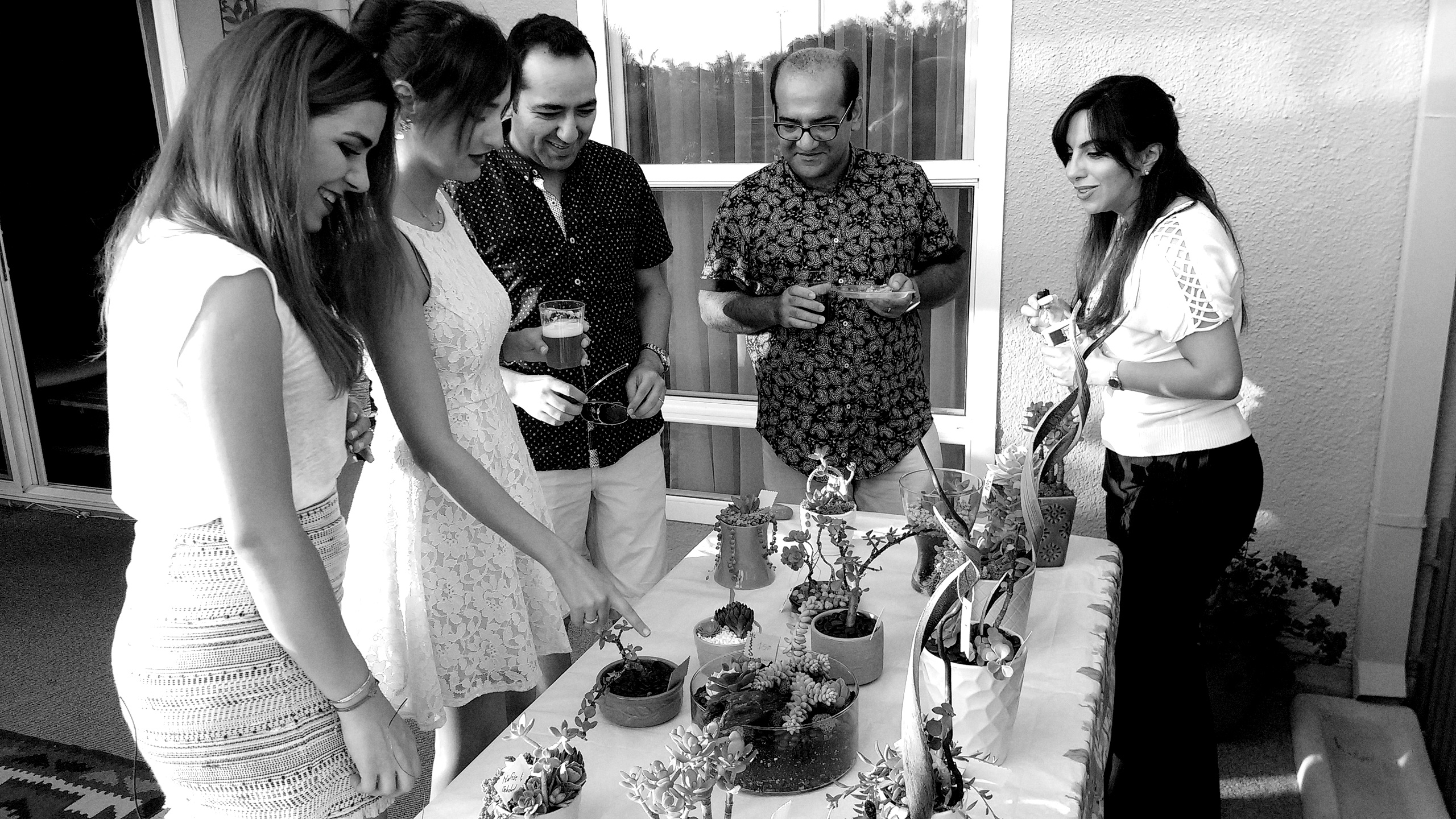 Is arrangement a “plant” word? And configuration an “art” word?

It feels just a little bit grandiose to call these delicate works configurations. But is there anything marginalizing about calling a work of art an arrangement? 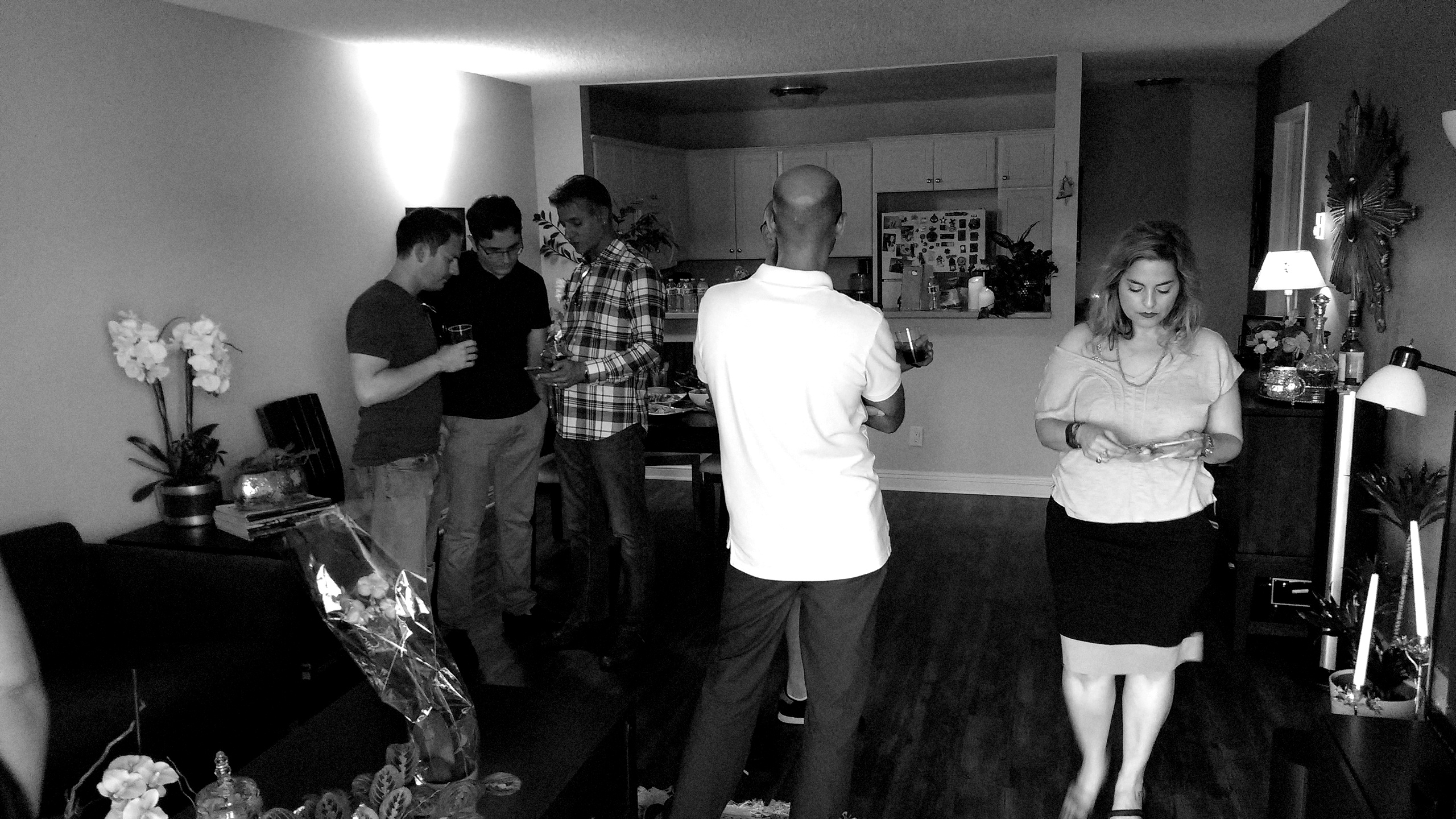 Guests inside Mahsa Soroudi & Mohsen Vafa’s home. The reception was from 4-9pm. When I arrived at 6:30pm it was still on the casual side. But an hour after the reception was theoretically over, at 10pm, the place was packed! 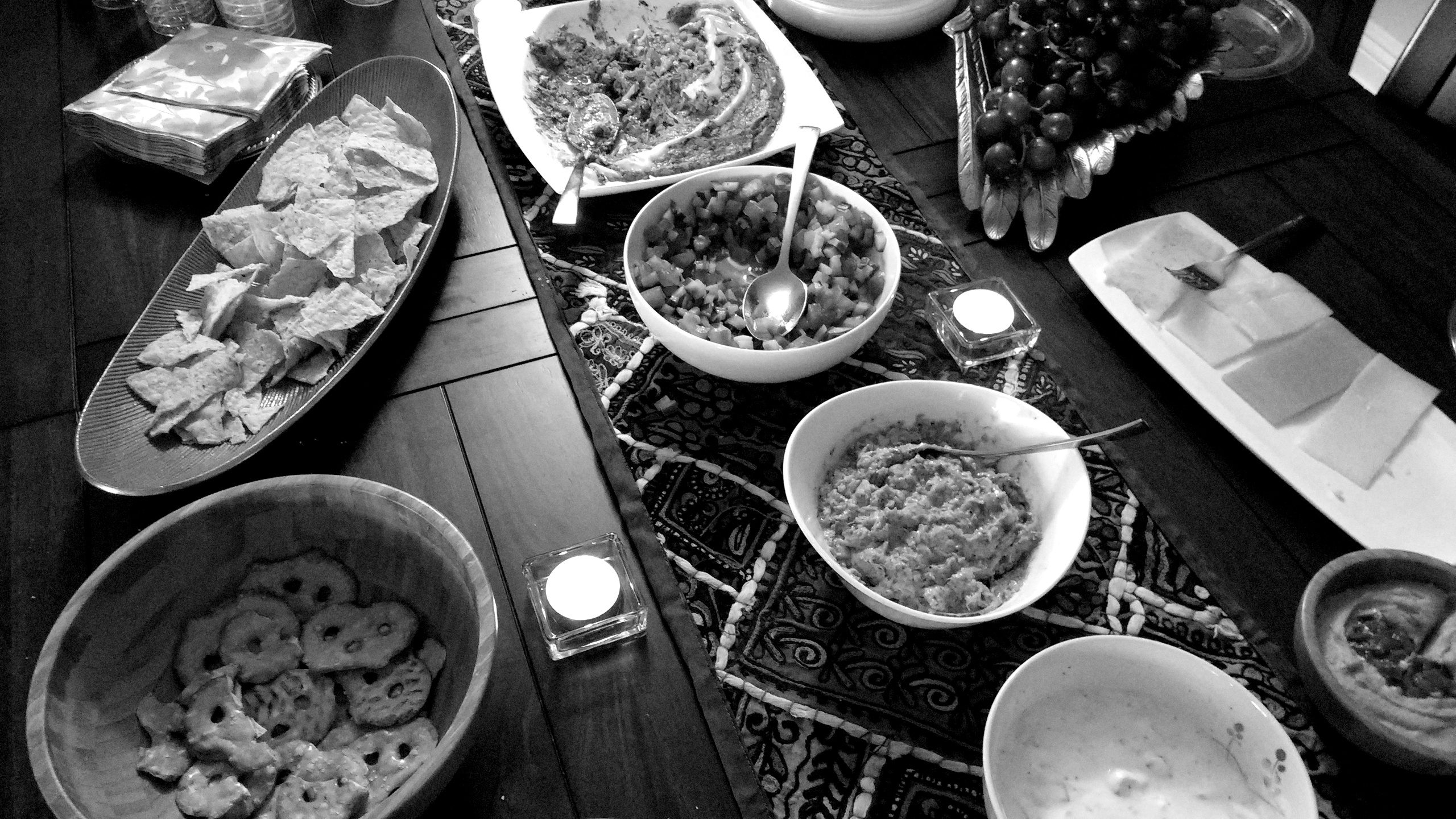 The mostly Persian hors d’oeuvres. And some cheese. 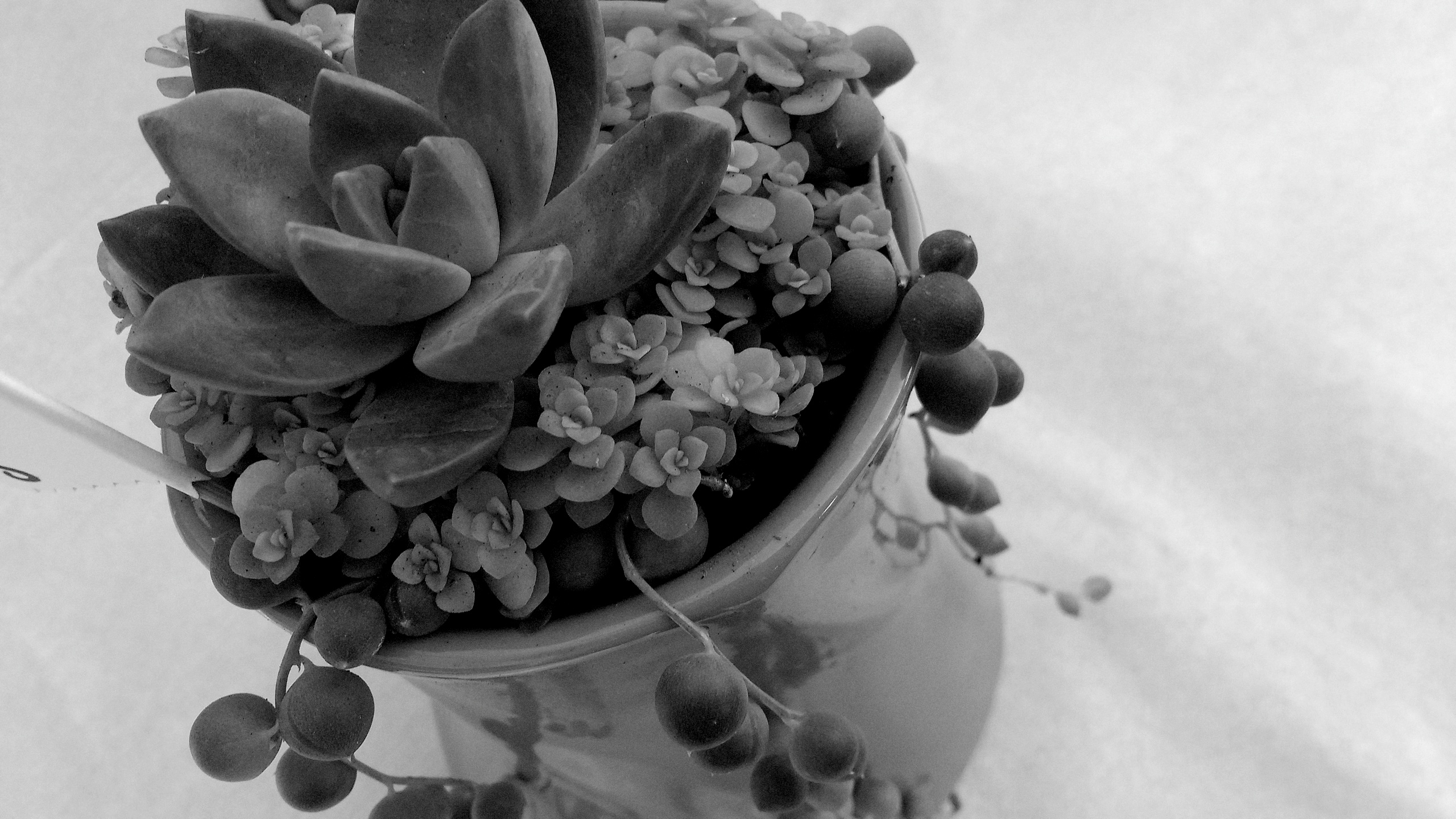 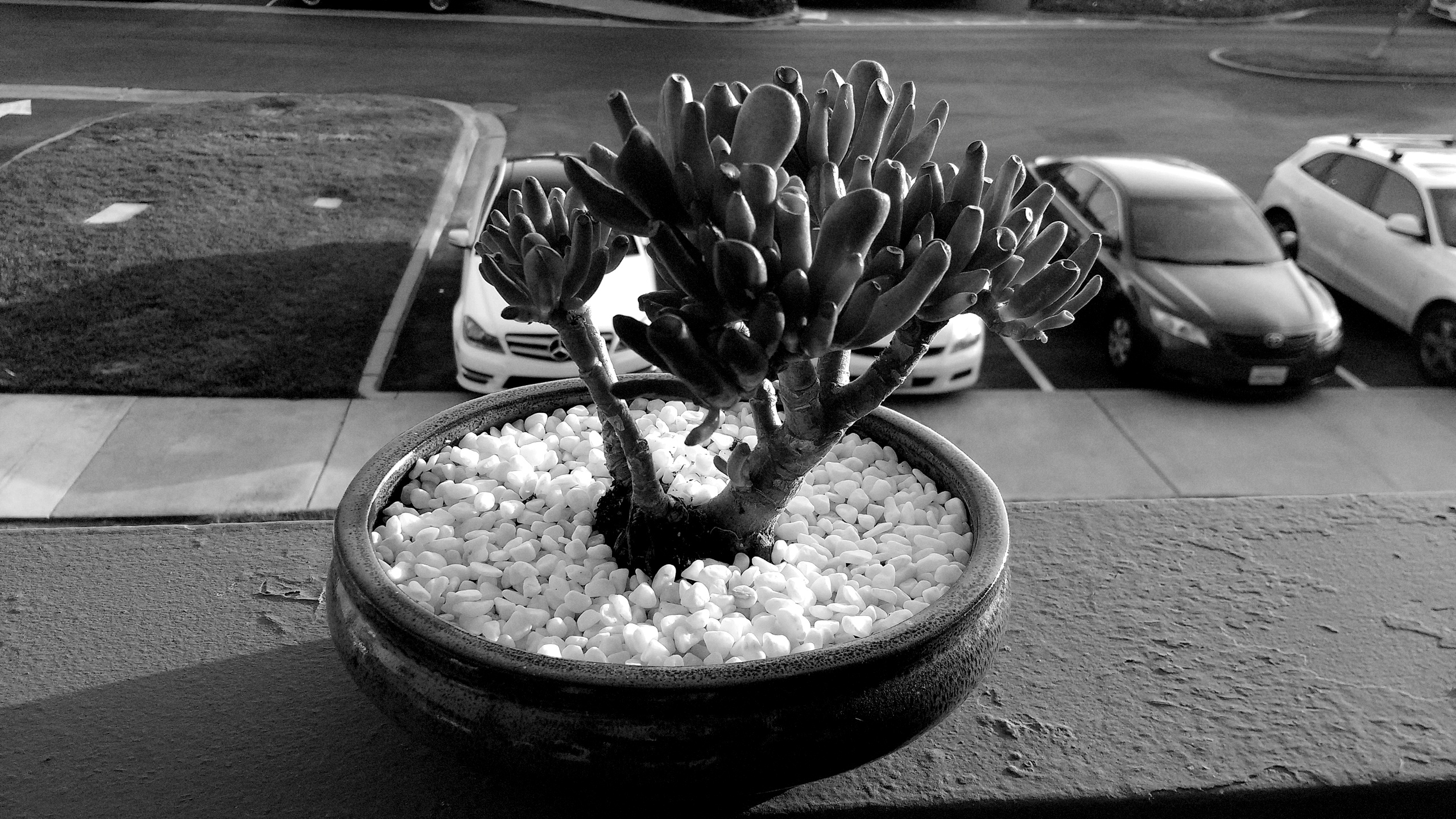 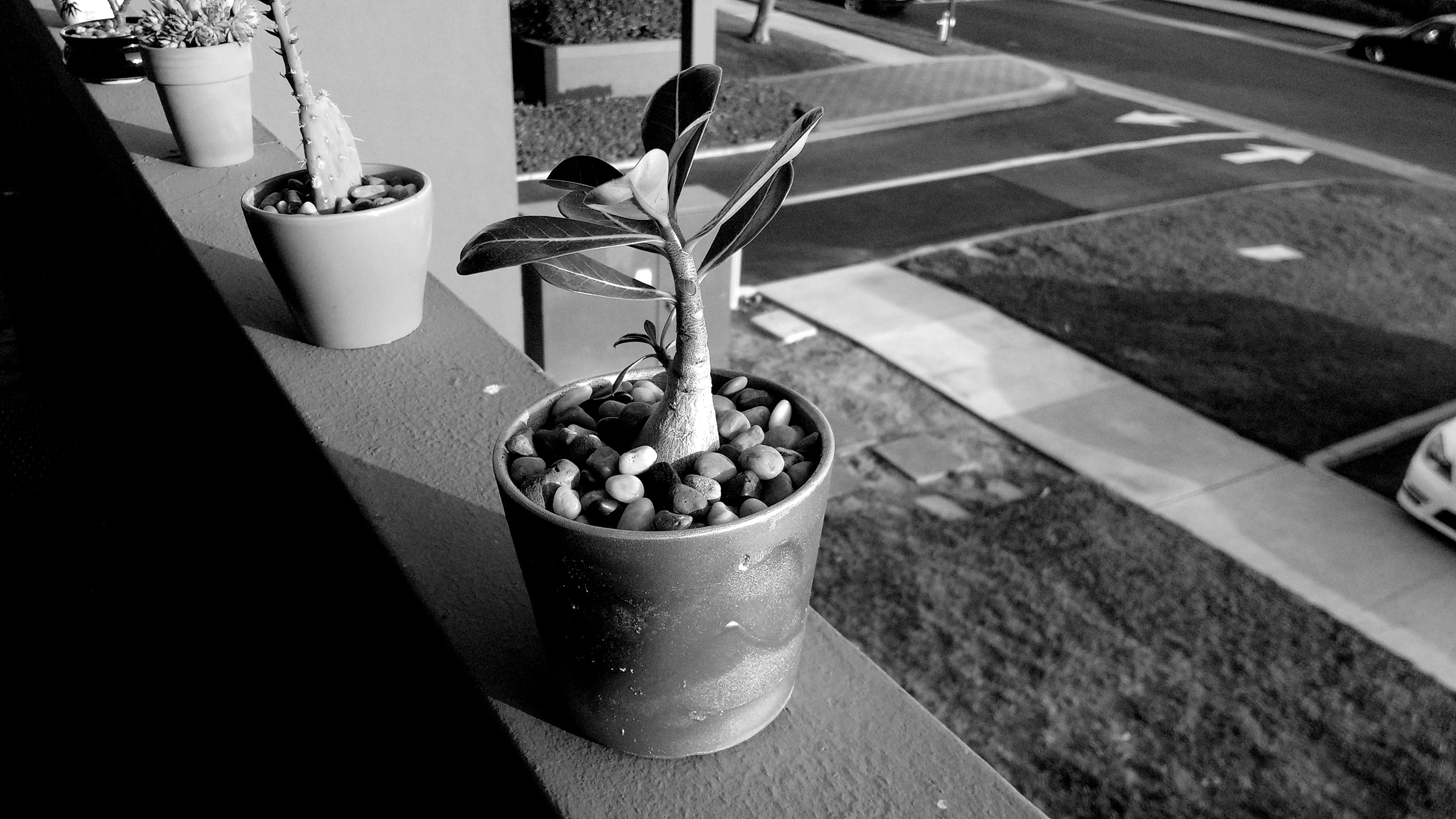 I learned today that (almost) all cacti are succulents, but succulents are not necessarily cacti. (thank you Wikipedia) 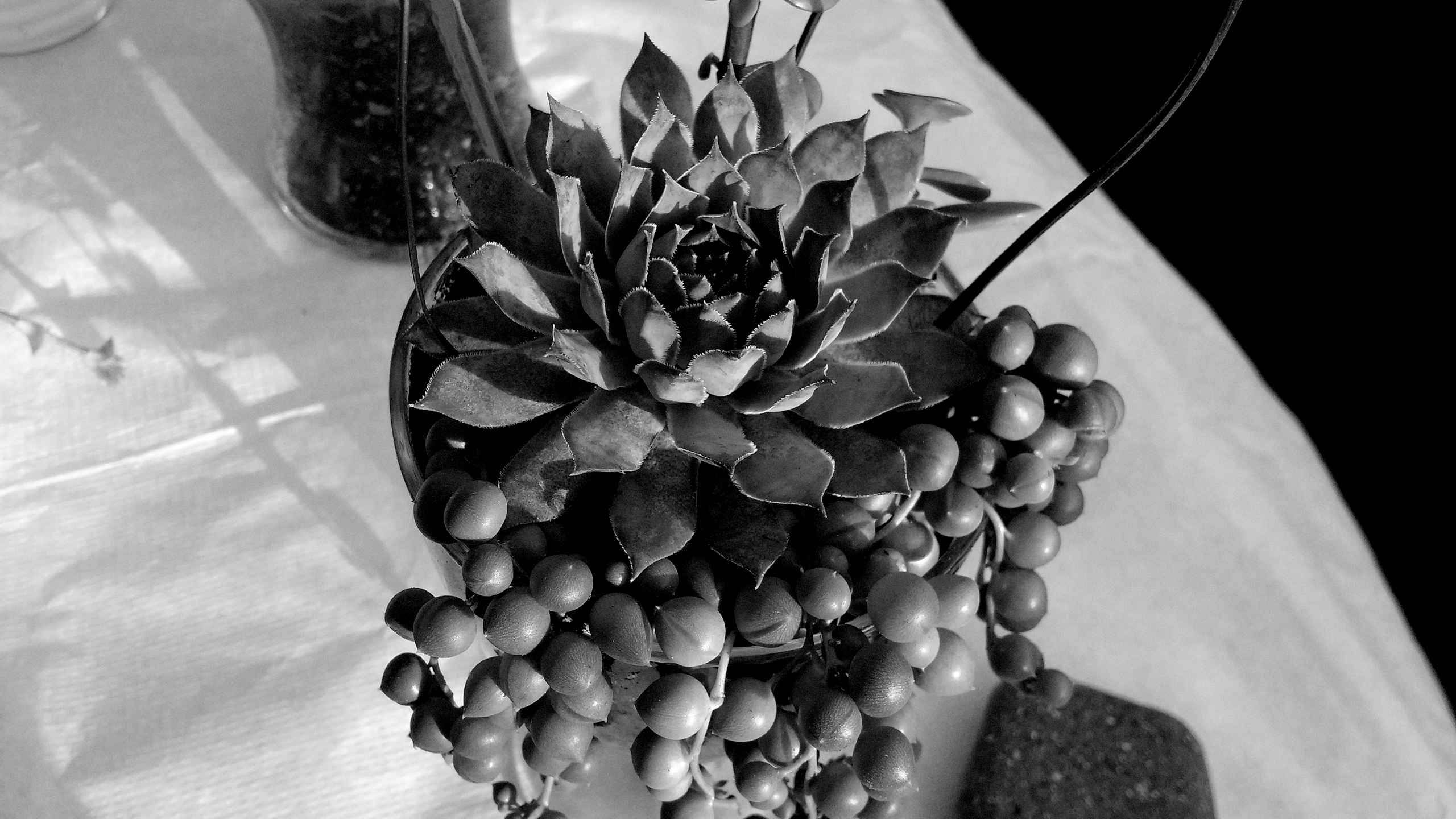 One more succulent arrangement. Or configuration, even.

A Conversation with Mahsa Soroudi

A conversation with Iranian artist Mahsa Soroudi. Life in Tehran. Immigrating to the United States and Southern California.

The conversation focuses on two of her art projects, “Nature’s Cadence,” and “7,500 Miles.” The first a journey with drought-tolerant succulent plants that paralleled her own “drought” as an immigrant in a foreign land.

7,500 Miles is the distance between Soroudi’s current home in Southern California, and her hometown, Tehran. In this exhibition Soroudi and fellow Iranian expatriate Parisa Ghaderi curate work from a range of Iranian women artists whose art defies Western stereotypes to explore the issues of their own lives and in their own time. 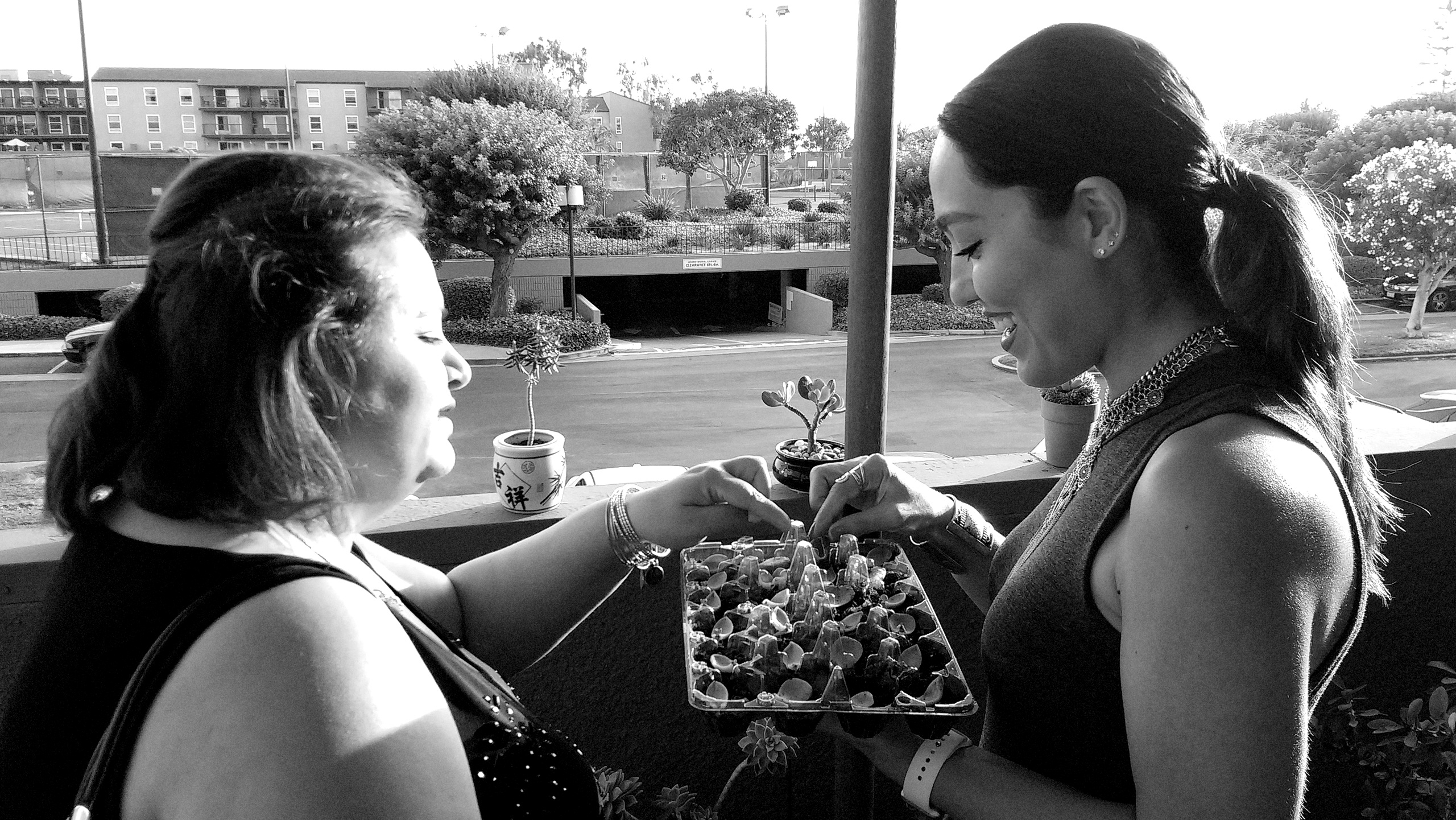 Mahsa Soroudi (right) explaining a cutting project to a guest.