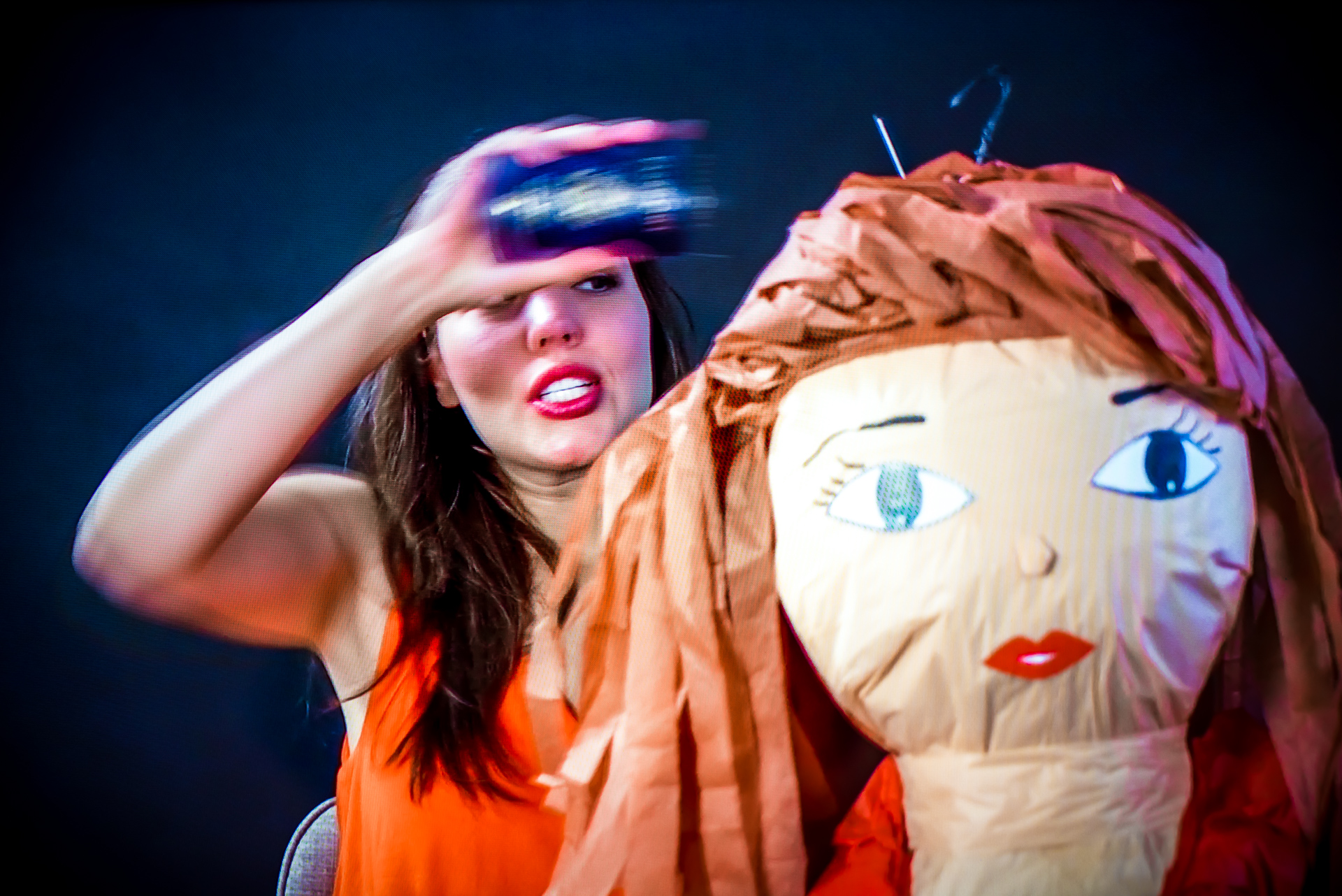 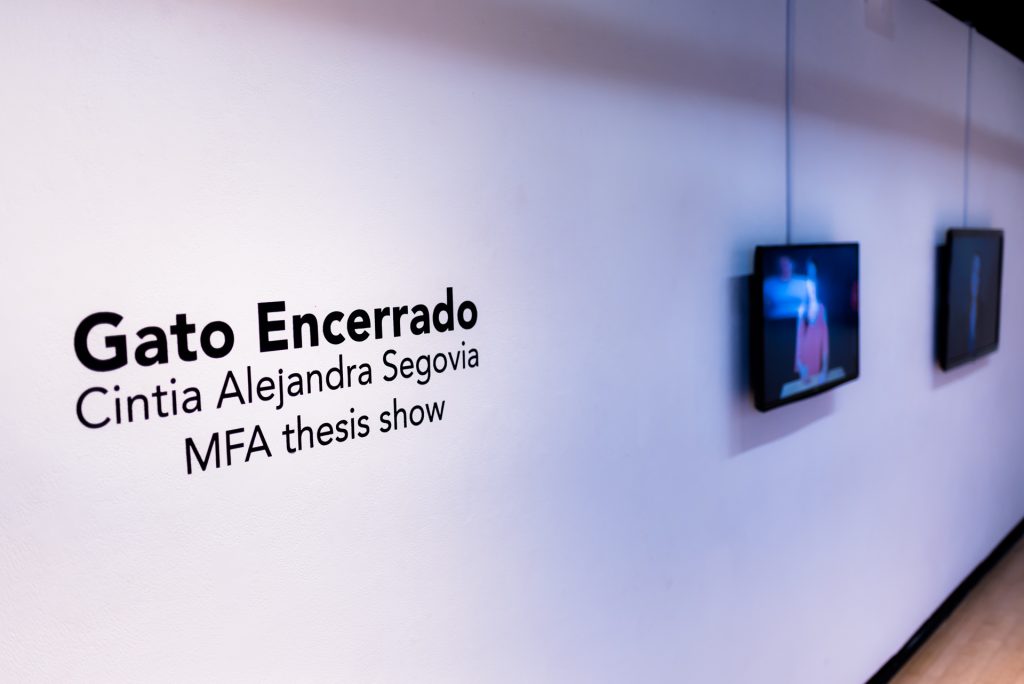 The current American President dreams of a White Nation.

Richard Rodriguez of the Pacific News Service has argued that the United States does not have an Immigrant problem. He believes instead that it has a Native Born problem. He’s argued that America should welcome immigrants. To help make room, America should ask the 3rd generation of native-born to go elsewhere and give someone else a chance.

Made in America by an Immigrant

Cintia Segovia was born in Mexico City. She learned English as an adult in the United States and recently became an American citizen. In her performance, installation, and video work, Segovia explores language, gender, immigration, border walls, and other aspects of life when people try to move across lines on maps. 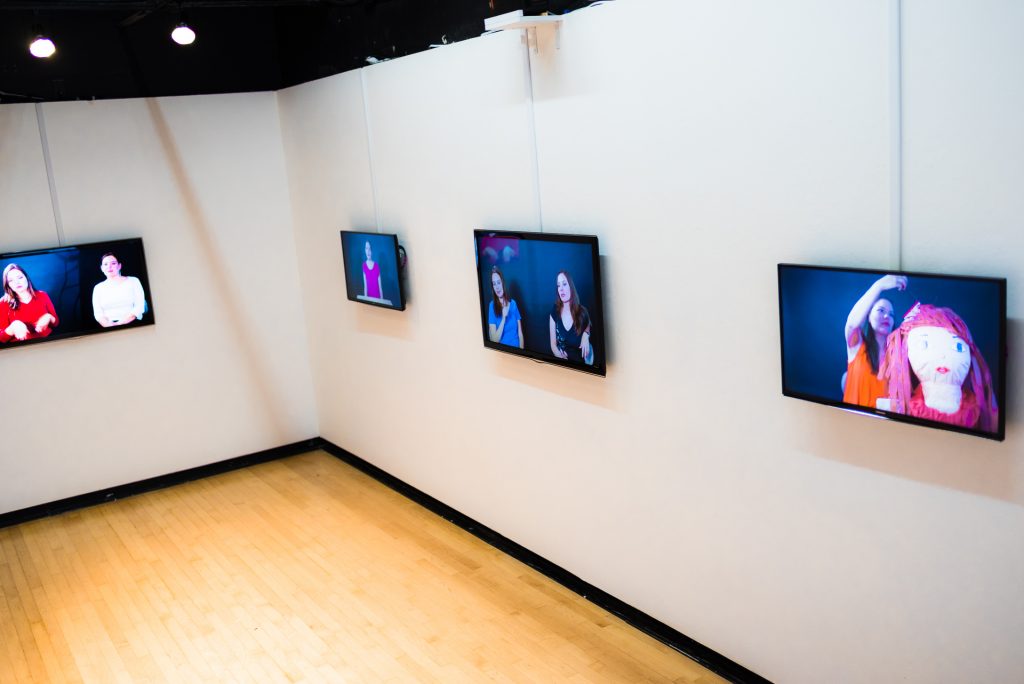 For her MFA thesis exhibition Gato Encerrado, Segovia has installed 6 video monitors in the Long Beach State University, School of Art’s Merlino Gallery. It feels like a grand summary of the ideas she’s explored in recent years.

Ritual Of Judgement: Documention from Cintia Alejandra Segovia on Vimeo.

I’ve seen Segovia’s performance work Ritual of Judgement performed at two different venues. I’ve also seen a live performance version of her video work A Big Beautiful Wall. There is a power in Segovia’s physical presence. A certain mild-mannered quality. But also a seriousness and gravitas. Her immigration officer in Ritual of Judgement is deeply serious and demanding. If you’re a native-born American, the piece gives you a glimpse into an experience that you have not had, but that so many immigrants have. To become a citizen, an immigrant must learn more about America than many native-born Americans ever learn. A fact that was highlighted by an immigrant’s question to a native-born American in July 2016,

Donald Trump, you’re asking Americans to trust you with their future. Let me ask you, have you even read the United States Constitution? I will gladly lend you my copy.
— Khizr Khan, 28 July ’16

At one of Segovia’s performances, I decided to go ahead and fill out the form for an interview. But there was a long wait. And I didn’t like the questions on the form. I wound up in an argument with the immigration officer. The argument felt right in terms of the dynamics of the space. Yet if I were a real immigrant, with this officer holding my future in her hands, it’s hard to imagine I’d do anything but submit. 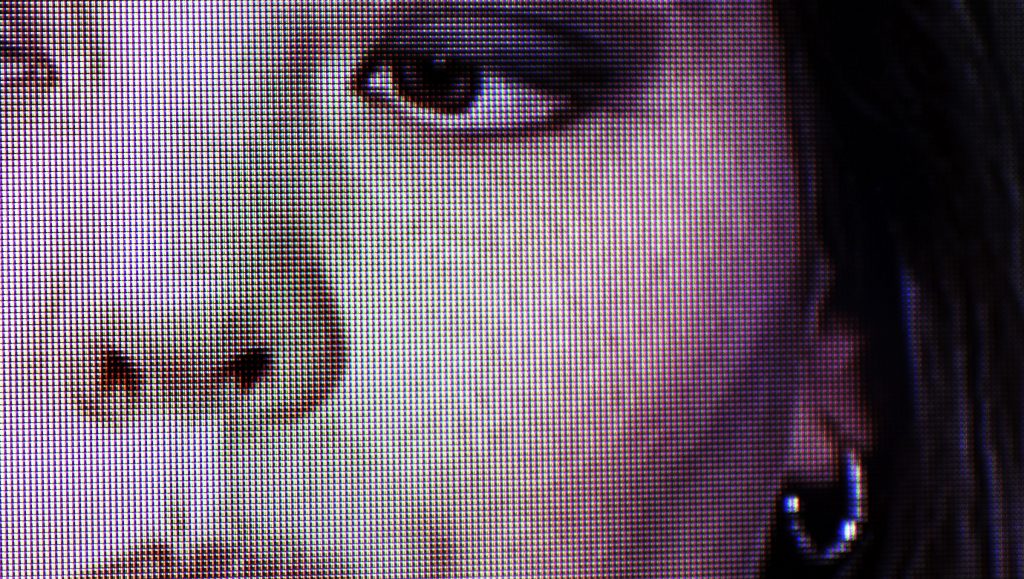 Pixels living together in harmony

Segovia’s performance work is powerful. I also appreciate her MFA thesis exhibition as a video installation. Partly for the complex choreography of the videos and Segovia’s heroic efforts to synchronize them all. But even more for all those glorious pixels. In spite of our president’s dream of an American monoculture, I am convinced that it is diversity that gives America its strength, creativity, and economic prosperity. The many cultures remixing each other at Venice Beach. A rich city like San Diego slamming up against a poor city like Tijuana. What accommodations, improvisations, mashups, must one explore to survive?

A single pixel has no meaning. Spread a couple million pixels on a screen and you can tell complex, rich stories. All the money in America, the bills, the coins, bear the words E Pluribus Unum. The story of the pixel is the story of America.

Designed by Apple in California, assembled in China 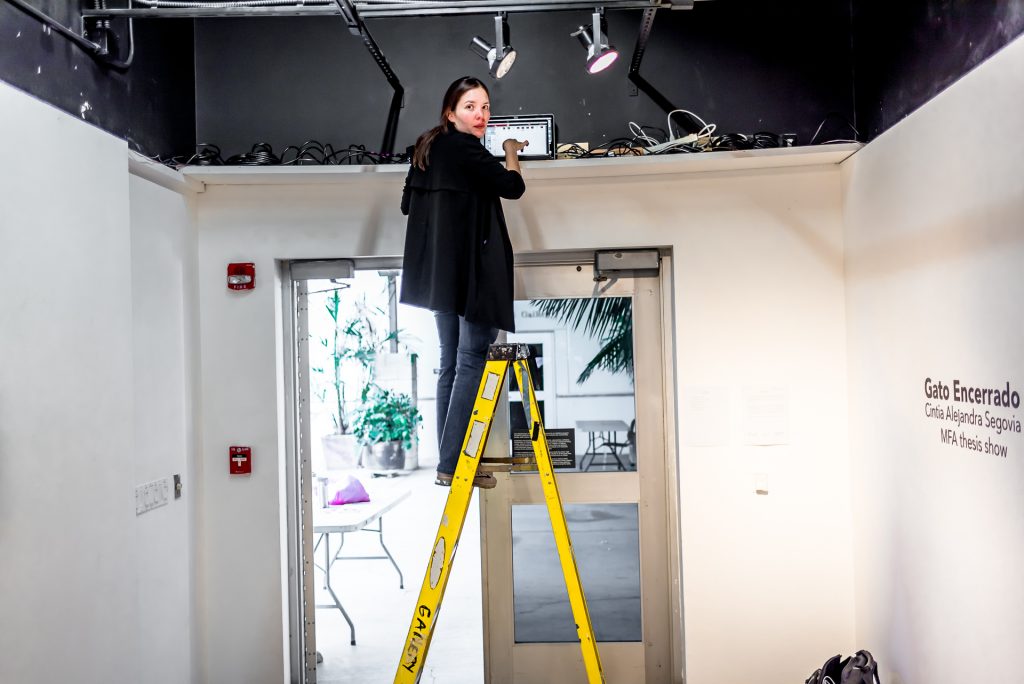 Cintia Alejandra Segovia in “the attic” of the LBSU Merlino Gallery working on synchronizing her 6-video installation.

Segovia describes the people on screen as less her characters, and more as aspects of her persona or identity. Each persona speaks for a few minutes. And then waits. Sits in silence. Waiting as the other personas speak. As you visit the installation, the speech hops from monitor to monitor with one speaking and 5 waiting.

My eye was drawn to the speaking persona. But those waiting are also elegant embodiments. Part durational experience like an Andy Warhol or Bill Viola piece, they also reflect the waiting that all immigrants must do. Waiting to get in. Waiting to be processed. Waiting to be checked up on. Waiting to exit.

When Artem & Masha from Perm, Russia came to visit me, their flight had a 14-hour layover in Paris. Unfortunately, Russia is not an EU country, and while they had visas for the United States, they did not have visas for France. They weren’t allowed to leave the airport. They weren’t allowed to get a sweater from their luggage. All they could do was try to sleep in a cold airport. To be an immigrant is to wait. 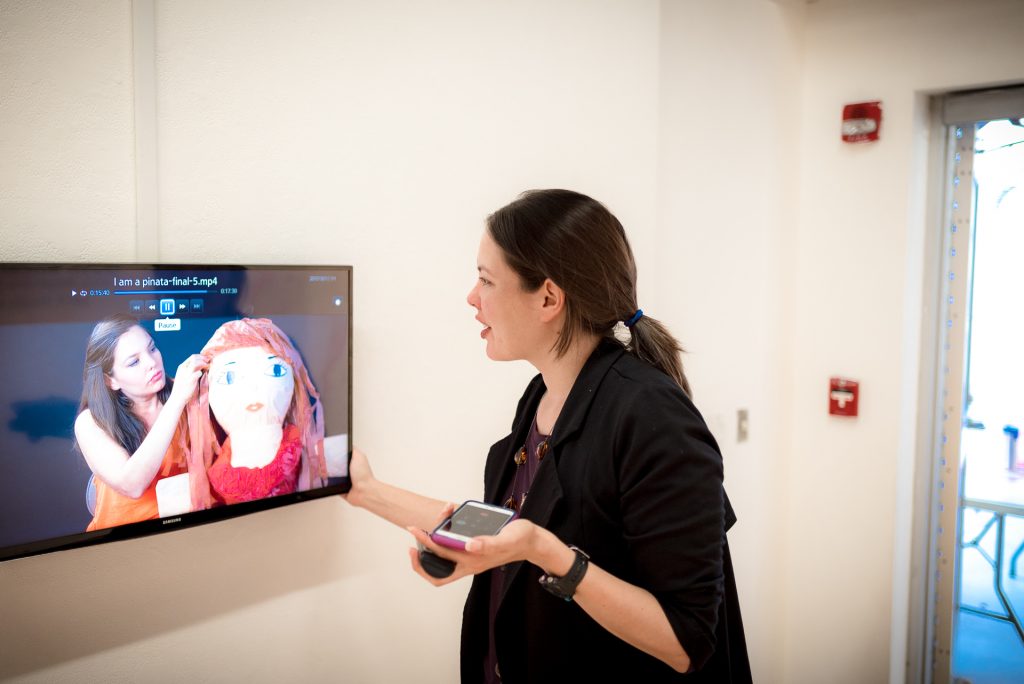 Segovia synchronizing one of her six videos.

When perfectly synchronized, no video overlaps any other video. Only one speaks at a time. Segovia tried to have one laptop stream all six video signals to the monitors, but that proved to be too much data transfer for the laptop to handle. She settled for the laptop sending 3 video streams and manually starting the other three. I think that sending so much video from a central source may not be the best solution. A control program, from her laptop or a Raspberry Pi, could send only control pulses to Blu-ray players at each monitor. I think this is a more scalable solution.

On Wednesday Segovia was teaching at CSU Northridge and asked her friends to open the gallery and start the videos. They made a valiant effort to synchronize them but didn’t quite get it perfect. There were some moments of speech overlap. And some moments of silence everywhere. And, that was great! The totally silent moments were a wonderful variation. The overlapping dialog was inspiring. When perfectly synchronized, the speakers are almost too polite. Too deferential. Yes, to survive immigration might require a bit of deference, but, as Segovia’s bilingual installation shows, it is also a world of many speakers. Of many tongues. Of simultaneous translation. I’m confident that Segovia will come up with an even stronger technique for synchronizing her videos. But I’m not sure she needs it. The not-quite-in-sync videos present a wonderful experience of multilingual mashup. 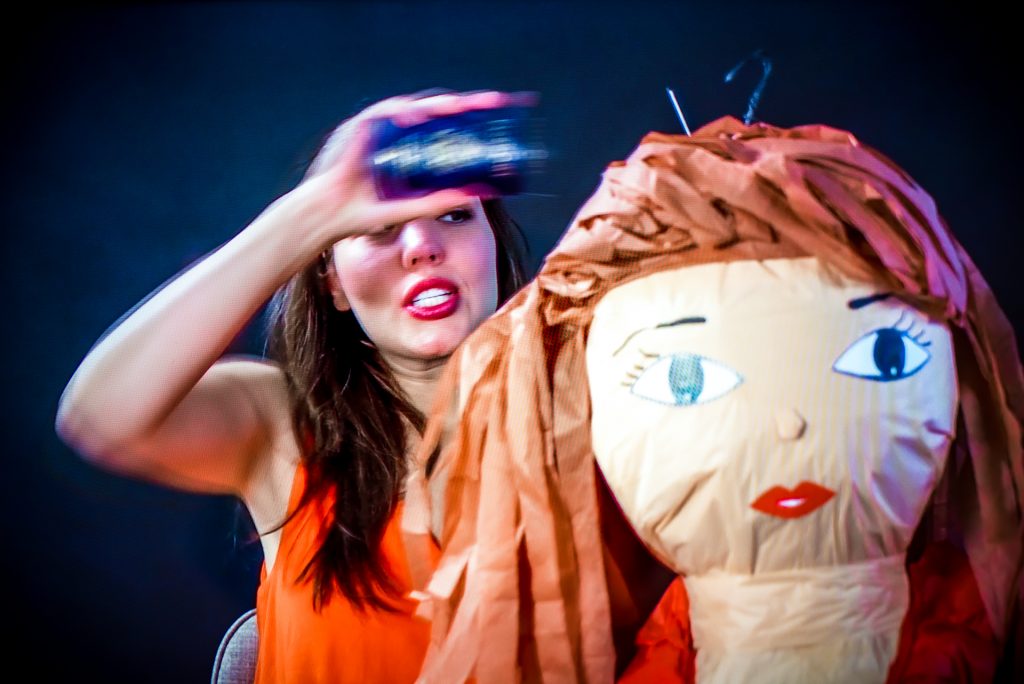 Filling the piñata’s head with ideas

Since I don’t speak Spanish, I am the immigrant to this video. I don’t know all that’s being said. But the images speak loudly. The piñata -girl matches Segovia in brown hair, red lipstick, and orange dress. Is she assembling the ingredients of her brain? Things she is composed of, or will need? Or is she exorcising baggage? As Segovia describes and comments on items to viewers, like a feather pen, a Barbie doll, or here, her United States passport, she inserts each item into the piñata’s head. Candy for a party? Or loading software into her brain so she can run on the USA21 Operating System? 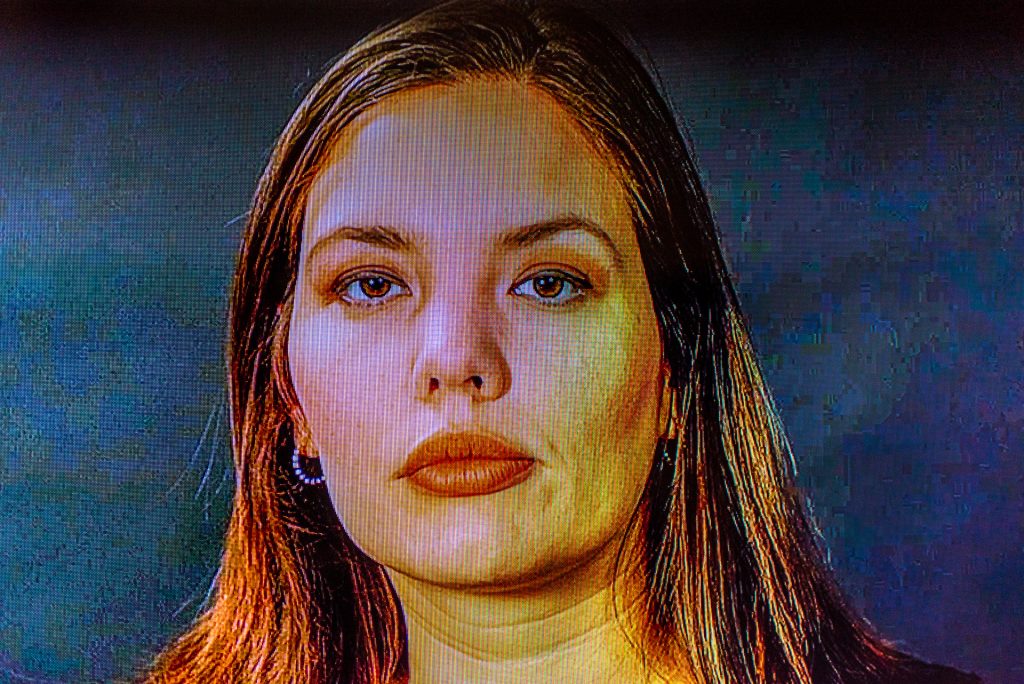 We are made of pixels. Gato Encerrado, Cintia Segovia, Merlino Gallery, October 2017 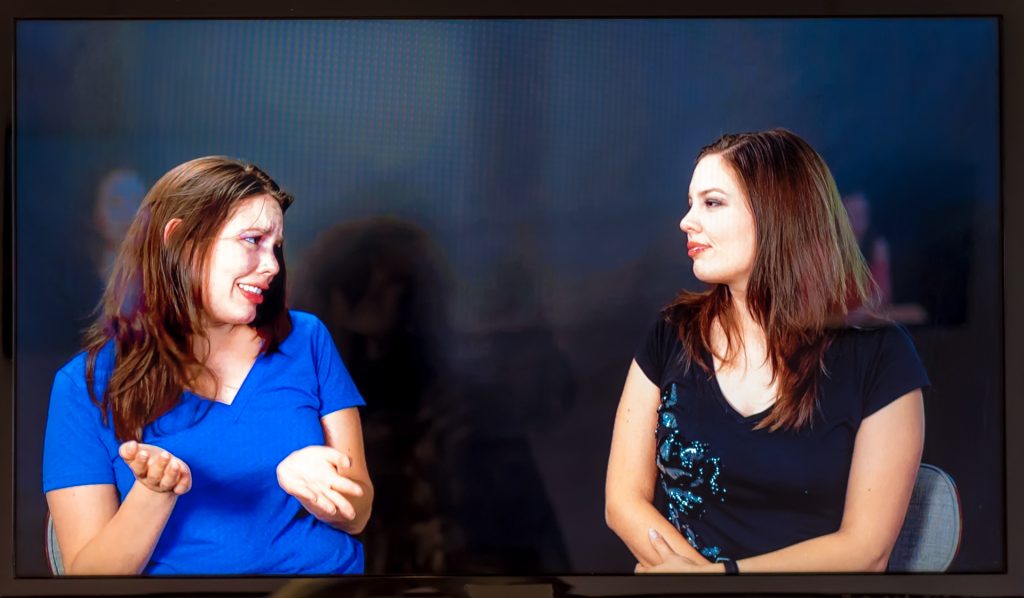 In a couple of the videos, Segovia talks to herself a la Natalie Tran. In a multilingual dialog, her personas debate the small things in life. In some ways, these are the most playful and clever of her videos. Yet by having another person to talk to in video-space, it turns the gallery visitor into more of a voyeur. With the single-persona videos, Segovia tends to address the audience and pulls us into her story. These pieces capture some of the power of her live performance work where you are guided through seemingly simple, yet increasingly Kafkaesque experiences. 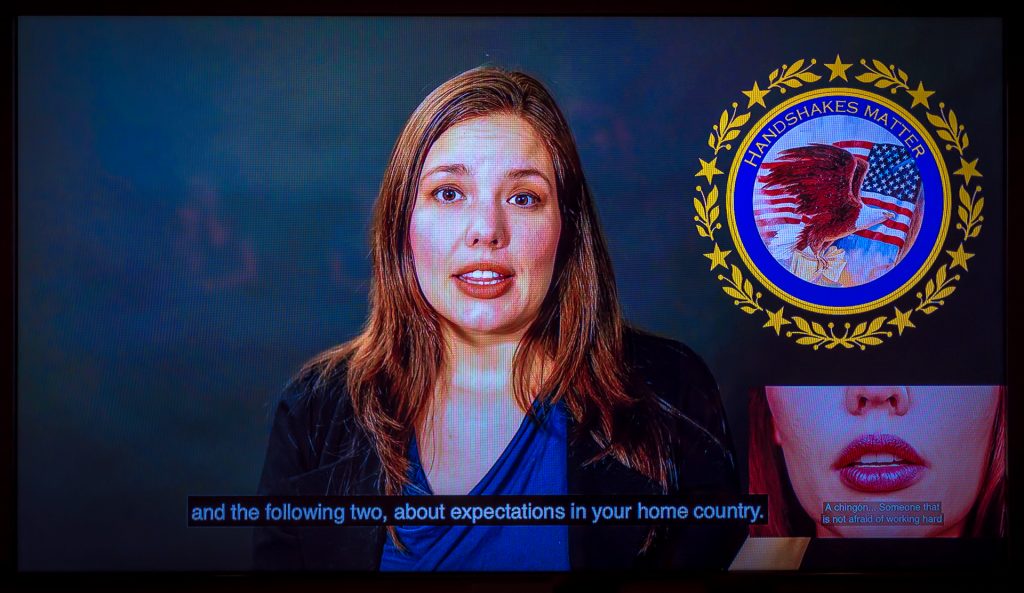 Expectations Service Program of the United States of America

Expectations Service Program of the United States of America

In this video, Segovia helps immigrants understand their role vis-a-vis their new country and their home country. What assumptions will be made about them? How can they best assimilate?

In an inset to the Expectations Service Program of the United States of America video, Segovia features a close-up of her lips pronouncing a word, and has the captioning,

A chingón… Someone that is not afraid of working hard

As a non-Spanish speaker, I’m not completely certain of the meaning and use of chingón and chingona. Here’s how Angela Aguirre, co-founder of Chingona Fire, defined Chingona for the Huffington Post earlier this year:

Chingona
noun. 1. a Spanish slang term meaning “bad ass woman”
Although the word “chingona” is a Spanish term, it is not limited to Latinas.
A chingona is any woman who chooses to live life on her own terms. PERIOD.
She is the scholar AND the hoe. At the same damn time. OR she is neither.
The point is: she gets to choose. And whatever choice she makes, is the right one.

Chingona is a contested word. Empowering for some. Offensive for others. Faggot is a word I would never use. But I know gay guys who call each other faggot. Used by someone who isn’t gay, I think faggot is a term of oppression. But used by someone who is, I think it is a term of endearment. Of understanding. Of common experience. Bitch is another contested term. It’s probably a term I shouldn’t be using. But there are women who call each other bitch in a familiar, or affectionate, or empowering way.

Is Cintia Alejandra Segovia a chingona?

I am not the arbiter of that!

Still… her work explores the most contentious issues in our culture. And she does this in a lighthearted, accessible way. Cintia Segovia charms, and entertains, and offers cultural insights, all at the same time. Maybe she is the baddest chingona in the room. 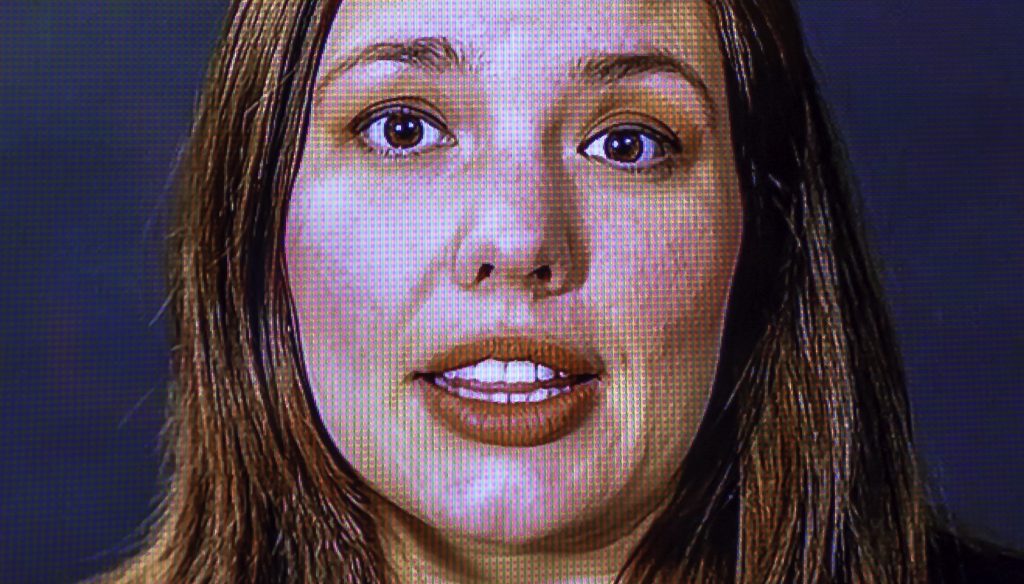 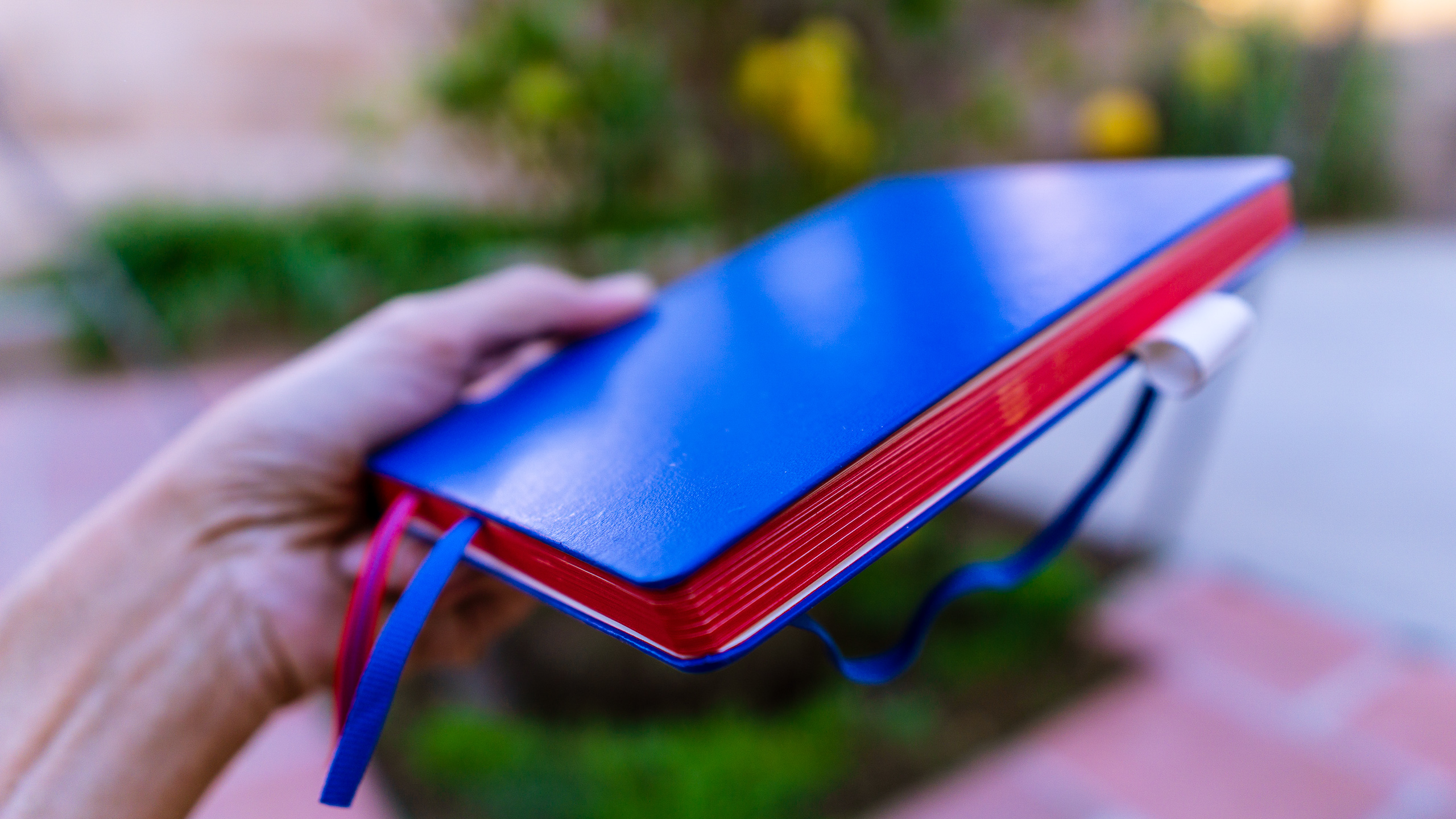 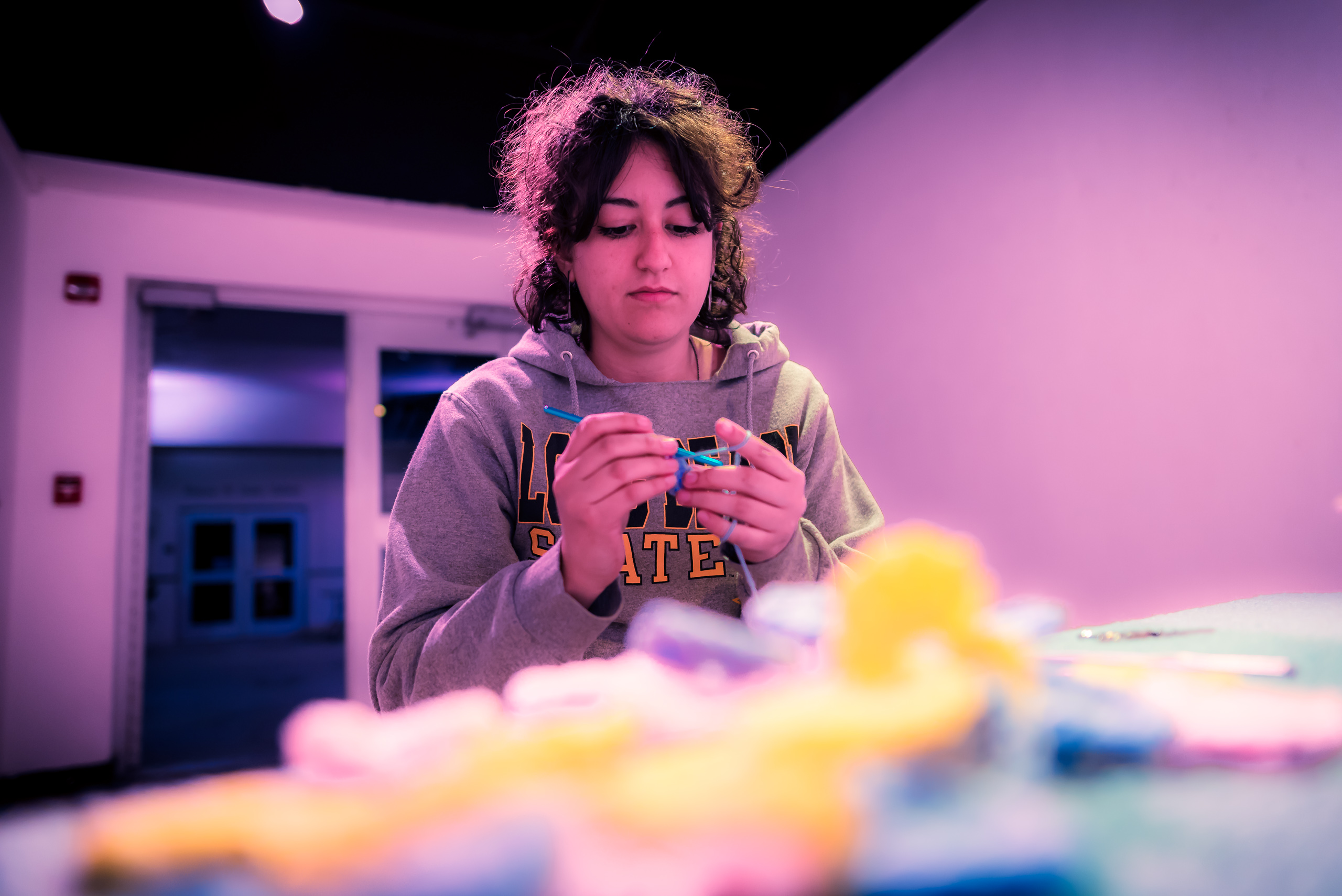 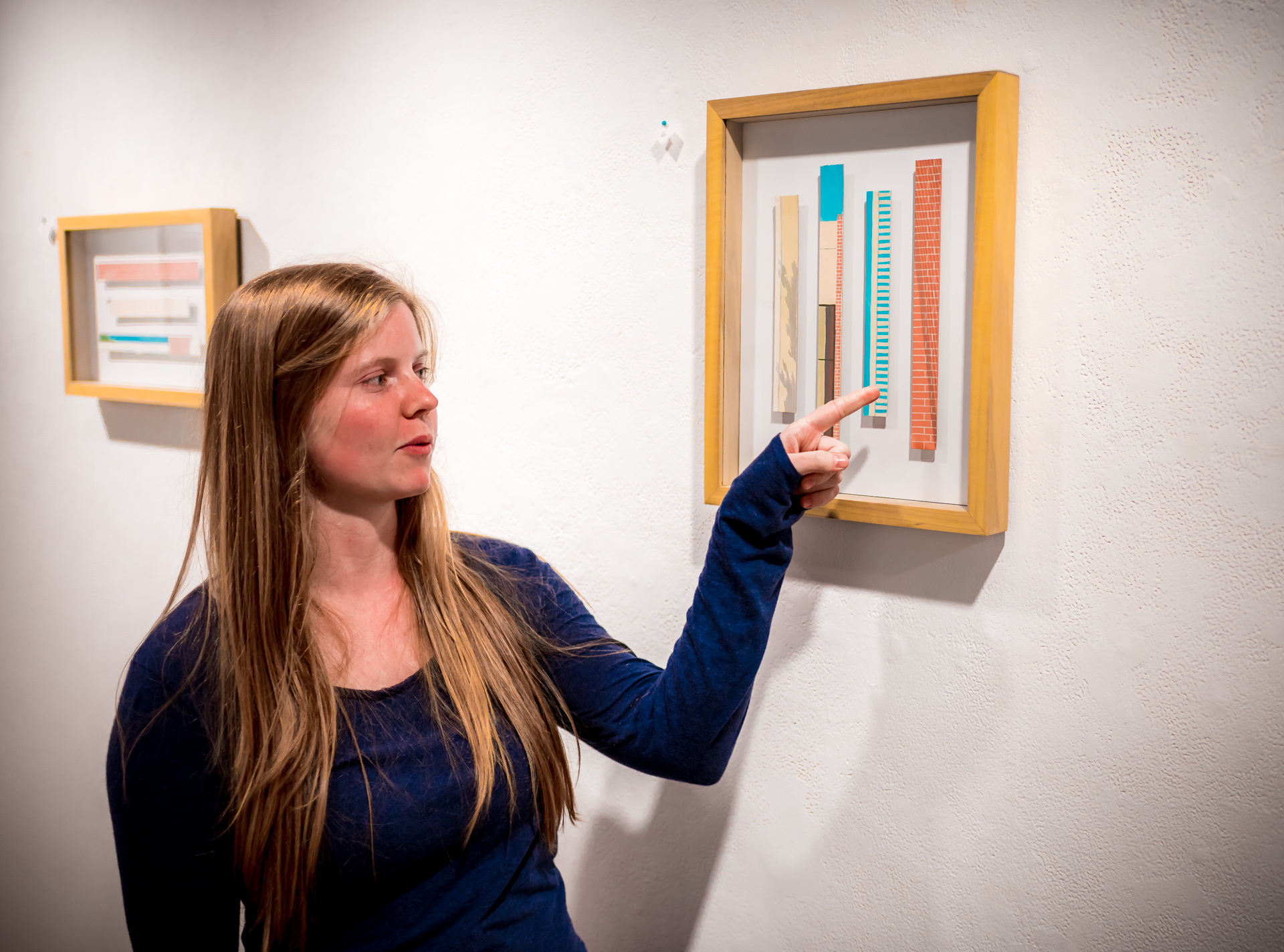