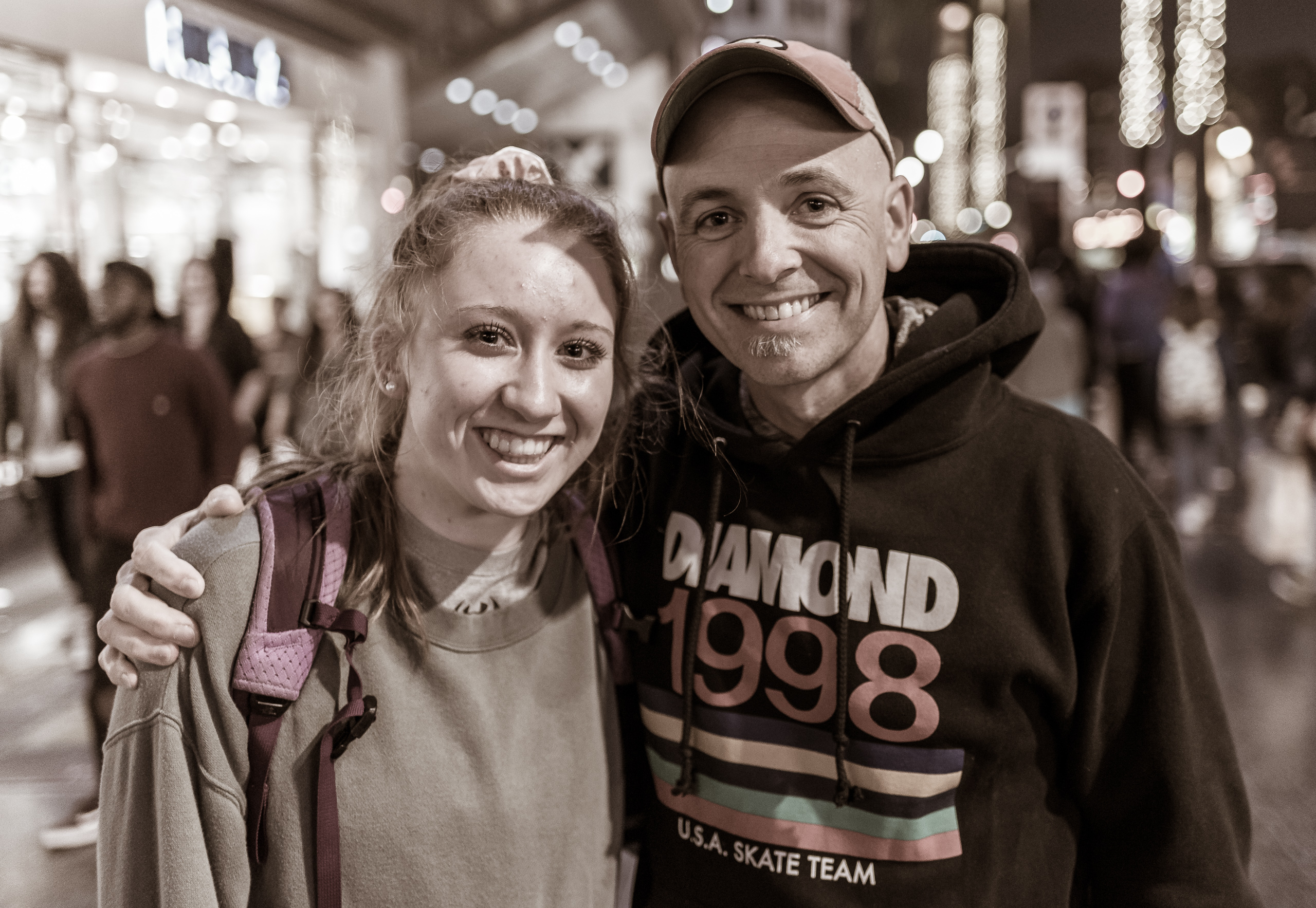 Olivia is a junior at a 200-student Christian High School in Lubbock, Texas. I assume Rich is one of her teachers. Next week is Spring Break, but this week is Mission week. Kids are going all over the country and world, and Olivia was pretty sure she was going to do the Guatemala trip this week. In Guatemala, they help out with younger kids there.

But the night before they had to turn their choices in, Olivia decided not to do the easy Guatemala trip. She decided she had to do the hardest trip of all: Los Angeles.

Glenn
Los Angeles is the hardest mission of all?

Olivia
No, because we don’t get to just quietly help people. We have to stand up before strangers and share things about our broken lives.

Olivia says that the LA mission has been challenging but also very rewarding. And apparently the other night she was praying about what she was supposed to do here and she was given the message purple. So when she saw my purple hair she decided she had to asked me what my story was.

So… what’s your story?

I have to confess that I don’t generally enjoy talking to Christians. I’m sure they are deeper than I realize, but in my experience, they often come off as bulk consumers of souls. A question like What’s your story? is often a pretext for proselytizing and getting you to say something like I accept Jesus Christ as my personal savior in as few minutes as possible.

When I enrolled at the University of Hawaii, in my first week in the state, or ever crossing The Pacific, I was reading in the library one day. Another student asked me about my life. And by the 2nd or 3rd sentence, she was asking me about Jesus Christ. When I finally explained that I didn’t necessarily share her worldview, she more or less said, ok, well, I’ll pray for you. c-ya!

She did not actually utter, “c-ya”, but whatever she did say, it felt like c-ya. As a new kid at a new school in a new state, I was happy to have someone to talk to. But for this Christian, conversation was contingent on accepting her beliefs as my own.

When Olivia asked me, what’s your story? I assumed that she, in fact, didn’t care at all about my story. That it was simply a pretext to get me to accept some part of her beliefs in a minute or two.

Olivia did not intend to profess to me with speech. She actually wanted to have a conversation with another human being. To profess simply through the mindfulness of her being. I imagine that if I’d told Olivia that her grace, and humility, and beauty were exceptional, that she’d have said it was because of Christ. But she had no need, nor agenda, to speak those words at me. She wasn’t there to colonize. Simply to be.

I spend a lot of time professing to my Artist’s Portfolio students @Long Beach State that it’s in their interest to be more public. Even though I appreciate that there are good reasons to have a private Instagram, I rail against them as not helpful. My point is that to promote your art career, I believe you are better served by being more public. But it goes deeper than that. If you’re in a wheelchair, it might be easier to stay in your apartment and have food delivered. But unless you’re willing to go out onto the street and curse at a city that doesn’t offer the affordances you need, then you’ll never be seen. Or heard. Or accommodated. Or included. Or afforded much of anything.

Do you have to be out about being Gay? It has to be your choice. Whatever you choose, your choice is an act of empowerment. If I choose for you, it’s only another act of oppression. Still, if you aren’t willing to march down the street and chant, we’re here, we’re queer, get used to it! Then no one will ever get used to it.

If a sensitive 16 or 17-year-old soul like Olivia isn’t willing to summon up the courage to ask a stranger in a strange city what his story is, then he will always say that he doesn’t generally enjoy talking to Christians.

I told Olivia that PETA often does a performative speech project from the same spot that her group was at tonight. She’d never heard of PETA, so I explained who they were and what they did. And I added that I hoped she knew that Hollywood Blvd wasn’t really typical of all of Los Angeles. That it’s kind of a crazy place. And, also, that I wasn’t sure that it was the best place for sharing ideas. That so much of what I encountered here: PETA, or Trump Lovers, or Trump Haters, or others, that their style and tone often felt more like yelling to me than like speech. That they might rally those already on their side, but that I wasn’t sure the nature of their speech was persuasive to anyone else.

Olivia
Where would be better?

Glenn
huh… I’m not sure…

I knew that I thought this was a weird, and confrontational place for speech. But I hadn’t really thought about where, in RL, was better? The park? The beach? The library? The shopping mall? Schools?

Yesterday Olivia and her group performed these same actions on the 3rd Street Promenade in Santa Monica. And, I guess that is where you speak IRL: 3rd Street, Hollywood Blvd, the busy, noisy, contested spaces.

In spite of the trollish and divisive speech in online spaces like YouTube comments and many others, it feels like you can also have deeper, richer, more nuanced speech online. Or maybe that’s just my delusion.

IRL, The Women’s March is only a peaceful love-fest if you only walk past other Women’s Marchers. If you encounter a group of counter-protesters, then it becomes a shouting match. And both sides, unlike Olivia, don’t have the bandwidth to actually care what the other side’s story is.

In admitting to Olivia that I didn’t know where a better place for speech than Hollywood Blvd was, I was reminded of my conversation with the artist Dread Scott. I’d asked him about his work, What is the proper way to display a US flag? I’d wondered if forcing people to step on the flag to write in the comment book wasn’t an overly charged, overly divisive act. I asked him if he thought such an aggressive act could change minds, or only speak to the faithful?

He eventually did give me examples of how he believed it did change minds. But before that, and perhaps more importantly, he told me about all the viewers to the work whose response was, thank you! About all the people who’d felt the oppression his work referenced, but had always felt voiceless, who now, finally, saw and heard someone speak their truth.

If you’re in a wheelchair, or the LGBTQ community, or Christian, or oppressed by America, or have any other life experience, then simply sharing your story is an act of building community. Whether or not anybody who used to hate or marginalize you changes their mind, you have given a voice to those who share some part of your lived experience. You have created community.

Thank you, Olivia. Keep up the good work. Have a safe trip home.

PreviousPrevious post: This is us, 8:01pm
NextNext post:Meeting friends on the corner, 9:31pm