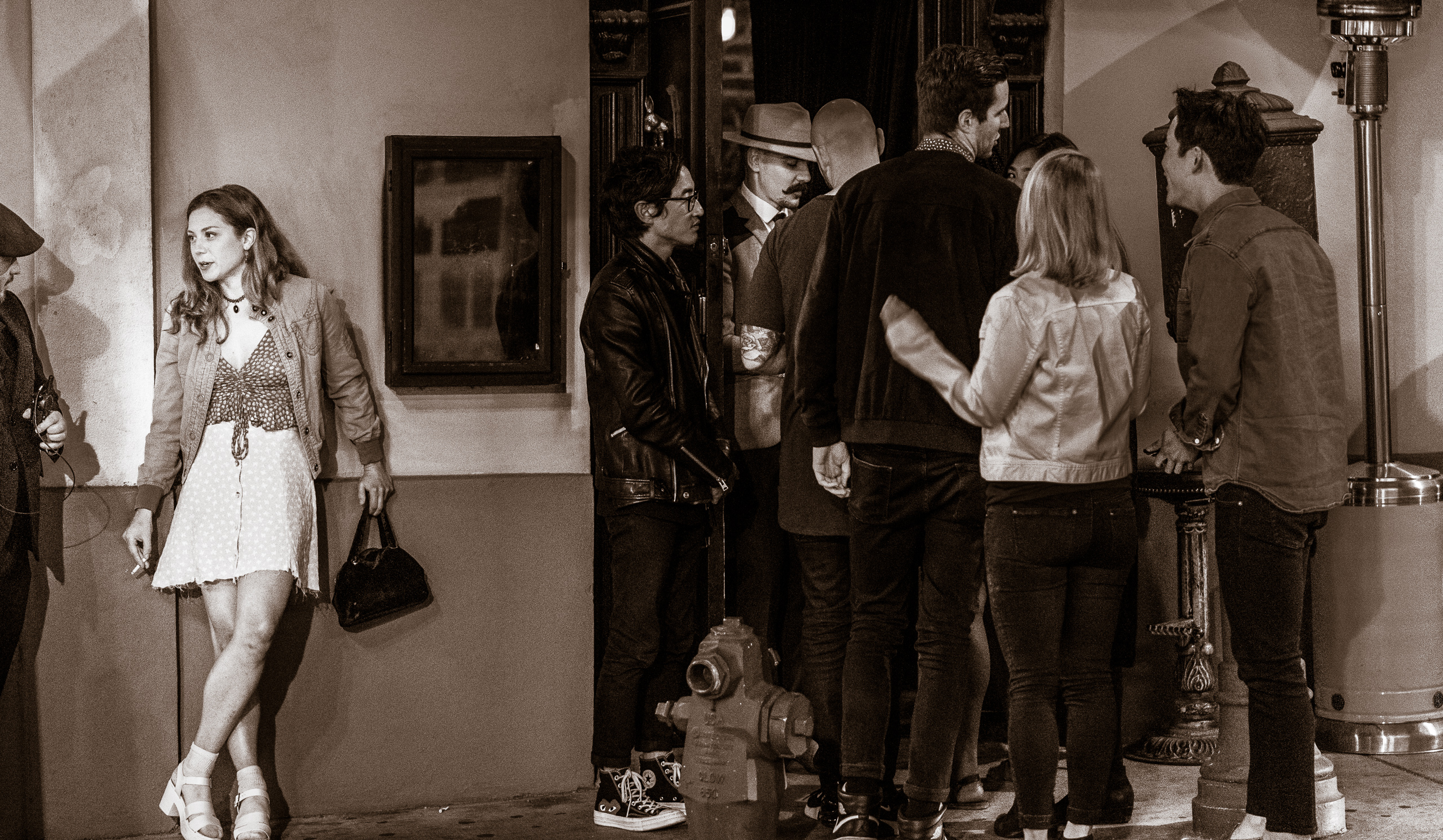 Free Culture on The Street

I was walking West on the North side of Hollywood Boulevard the other night. As I crossed the small side street Hudson, I snapped this photo of a woman taking a smoke break, and others waiting to get in at the speakeasy No Vacancy.

When I looked No Vacancy up online, I found many glowing reviews, and also a good number of negative reviews. Things like:

Love this bar, the music, the drinks, vibe, etc. But the short guy at the front with the same fedora on every weekend is a total douche bag! After 10:30p.m. he starts “cherry picking” the people he lets into the bar! He picks only the hottest or trendiest looking people. Even if you are at the front of the line and have been waiting there for hours, he will just completely ignore you and keep letting his people in instead. You know… all the hot girls that pop their chest out and flirt with him for a millisecond just to get in. Or other douche bag looking guys just like him that might slip him a little cash while they shake his hand. Love this place but if you want to get in, you better show up early or be ready to feel degraded by this little thing in a hat that thinks he’s the 💩

The positive reviews are more numerous than the negative ones. I’m not quoting Karina to conclude that the place sucks, but just to think about the privilege required to gain access to so many things and places. Gender, cash, contacts, whatever it might be, you can’t have an in-group without an out-group. 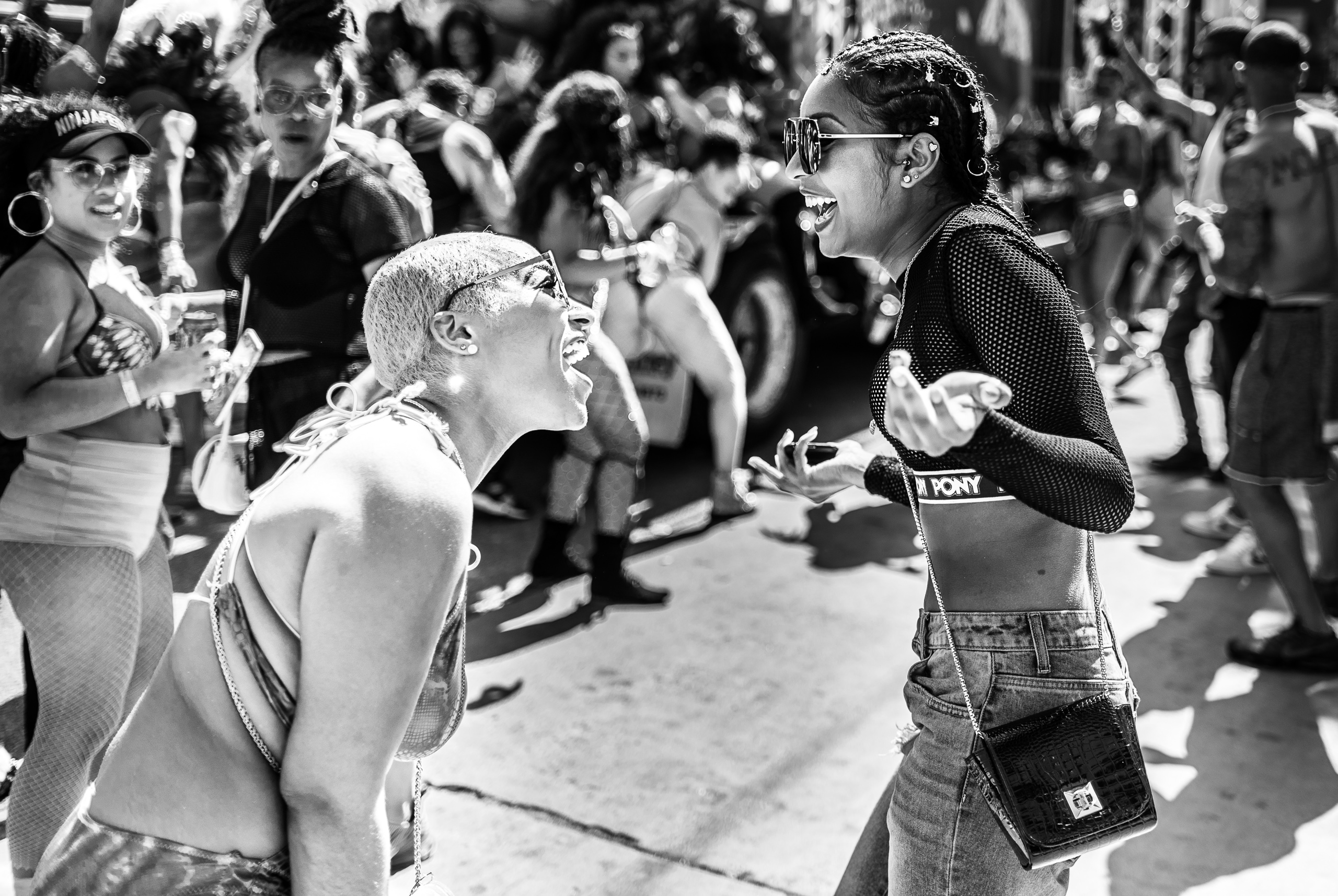 Friends meeting on the street at the Hollywood Carnival Parade

On Saturday I rode the Metro Red Line out to Hollywood & Highland to do my weekly documentation of whatever’s going on at Donald Trump’s Star on the Hollywood Walk of Fame. I noticed that past Highland, Hollywood Boulevard was blocked off to cars, so I wandered down to see what was up.

Turns out it was the Hollywood Carnival Parade. An enormous Carnival celebration of huge vehicles transporting DJ’s, Dancers, massive sound systems, and more, down the street. Lots of amazing Carnival costumes from so many Caribbean and Latin countries. So many people waving, or wearing, the flag of their country. Or clothing with their flag worked into it. Or a young girl who made her own Trinidad & Tobago flag with crayons.

Except for the occasional rope-line to keep dummies like me from getting run over by one of the massive rigs, everyone seemed free to be anywhere on the street. You didn’t have to dress sexy, even though many did, you didn’t have to buy a table or a bottle, you just had to be there. It was just the street. Granted, a kind of famous street: Hollywood Blvd. But still, just a street. A place where no status or connections or special access is required. A place where everyone contributes who and what ever they are to the rich tapestry of the street. 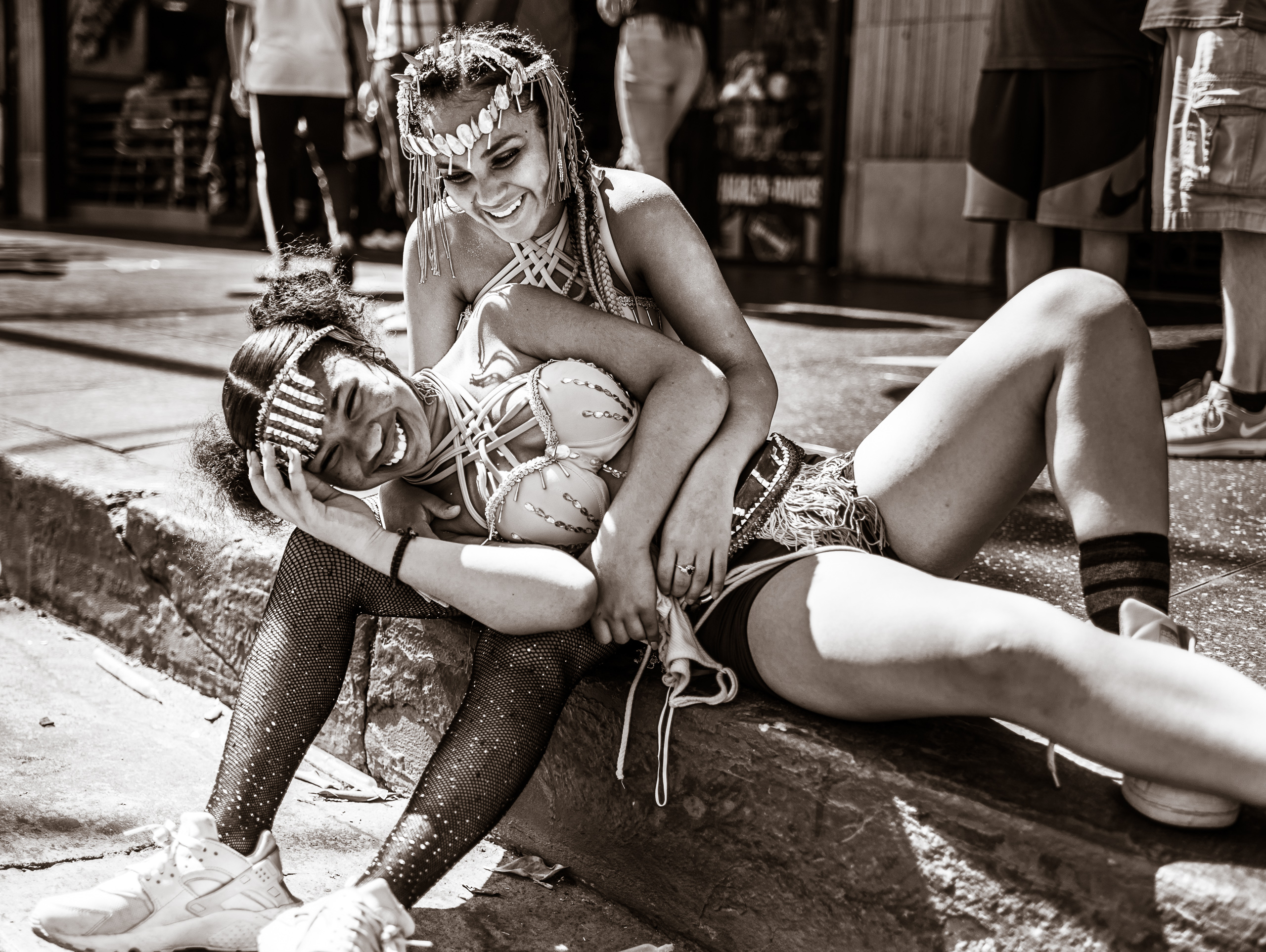 Like many street photographers, I love a 35mm prime lens. The 35’s slightly wide angle view seems just right to capture moments at close distance. You need a longer lens to capture moments from the outside. With a 35 you have to be there.

At places like LA’s new LAFC Stadium in Exposition Park, or at Long Beach State University’s Pyramid, I’ve been denied entrance because I had a camera. On the street, you never need the NCAA’s, or some other governing body’s, permission. You can take a picture of anything on the street. It’s a fairly basic right in this and many other countries. The main limit to what you can photograph on the street is the basic principle: don’t be a jerk.

For me, The Street has a bit of kinship with Richard Stallman’s Free Software and Lawrence Lessig’s Free Culture. The Street is a relatively democratic place in a world of ever more proprietary content and privatized spaces.

I feel dirty even admitting it now, but for most of my life I marked my creative works with the mark of the beast: Copyright All Rights Reserved.

My own Damascene conversion came in 2007 when I met Jon Phillips, then a Creative Commons evangelist. Our conversation was like scales falling from my eyes. Two months later I had a conversation with Richard Stallman and my journey to the light was complete.

It would be another 10 years before I started shooting Street Photography, but now that I am, it all makes so much sense.

I Love the Street

I live a fairly easy, privileged life. Still, there are so many places I’ll never go. And things I’ll never do. But you can always walk down the street. Yes, Hollywood Boulevard is a little more exciting than Willard Avenue (the width of the culture is proportional to the width of the sidewalks!) But they are still streets. Streets where everyone is welcome. Streets where anything can happen.

I was crossing the street a few months ago and I saw two women coming toward me from the other side of the street. The weather was still cool here in LA, and the women were wearing wonderful coats and holding hands. I thought they looked beautiful and I raised my camera to take a photo. As I raised my camera they both turned their heads away. I lowered my camera and mouthed “sorry”.

For sure it was their right not to be photographed if they didn’t want to be. And hopefully, being a lesbian couple in 2018 in Los Angeles is no big deal to anyone. Still, I think it’s important to note that while we all have the right to be private about anything we choose to keep private, that voice, and power, and inclusion, come through being Out.

If you want to keep your sexual orientation, or your geeky Star Trek obsession, or anything else private, that should be your right. But when you choose to be out about those things or any other aspect of your identity, you create awareness and community. Marriage Equality in my country is not perfect. But it’s come a long way from a few generations ago. I believe that an essential part of that progress is that people were willing to march in the streets and chant things like

We’re here, we’re queer, get used to it.

And to a significant degree, our culture has gotten used to it. If you’re in a wheelchair it might be easier to never leave your apartment and just order the food and everything else you need. But unless you’re willing to bump your chair against unfriendly curbs and shout that this city hates you, you’ll never help to build a more friendly and inclusive city.

When a Street Photographer presents some aspect of human identity they promote greater awareness, appreciation, and inclusion of the richness and diversity of our culture.

If that lesbian couple hadn’t turned their heads, I would have gladly published their photo here on Metro. On the other hand, I don’t photograph The Homeless. It just feels like I’d be taking advantage of someone’s circumstances. Still, homelessness is a huge problem in my city, my state, and my country. Someone does have to photograph the homeless. Invisible problems don’t get solved.

The United States Congress debated Child Labor in America for a long time without doing anything about it. It wasn’t until Lewis Hine photographed child labor in America between 1908-1912 that the public came to appreciate how things were and to demand change from Congress. In this case, one photographer gets a pretty big chunk of credit for changing a nation’s laws. Hine’s work wasn’t Street Photography per se, we’d probably call it Journalism or Documentary. Nonetheless, under any label, to present human life as it is actually lived is a fundamental act of representation.

For me, Street Photography isn’t about outing people who don’t want to be outed. But it is about an often non-verbal collaboration with people to represent some aspect of their identity.

As a group, Street Photographers help to produce Representation, Inclusion, and Civil Rights. I hope, in balance, our work leaves the world a slightly better place. 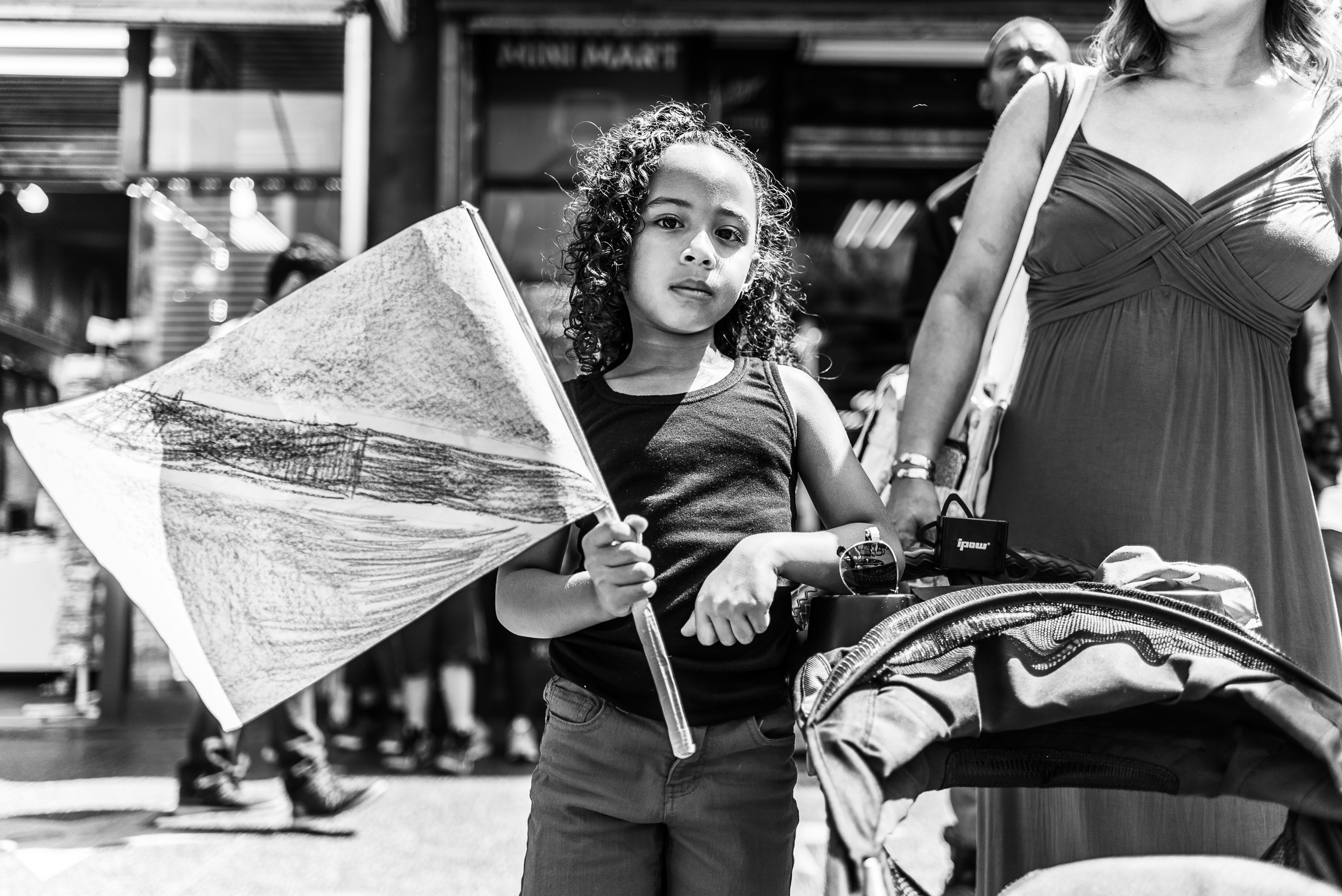