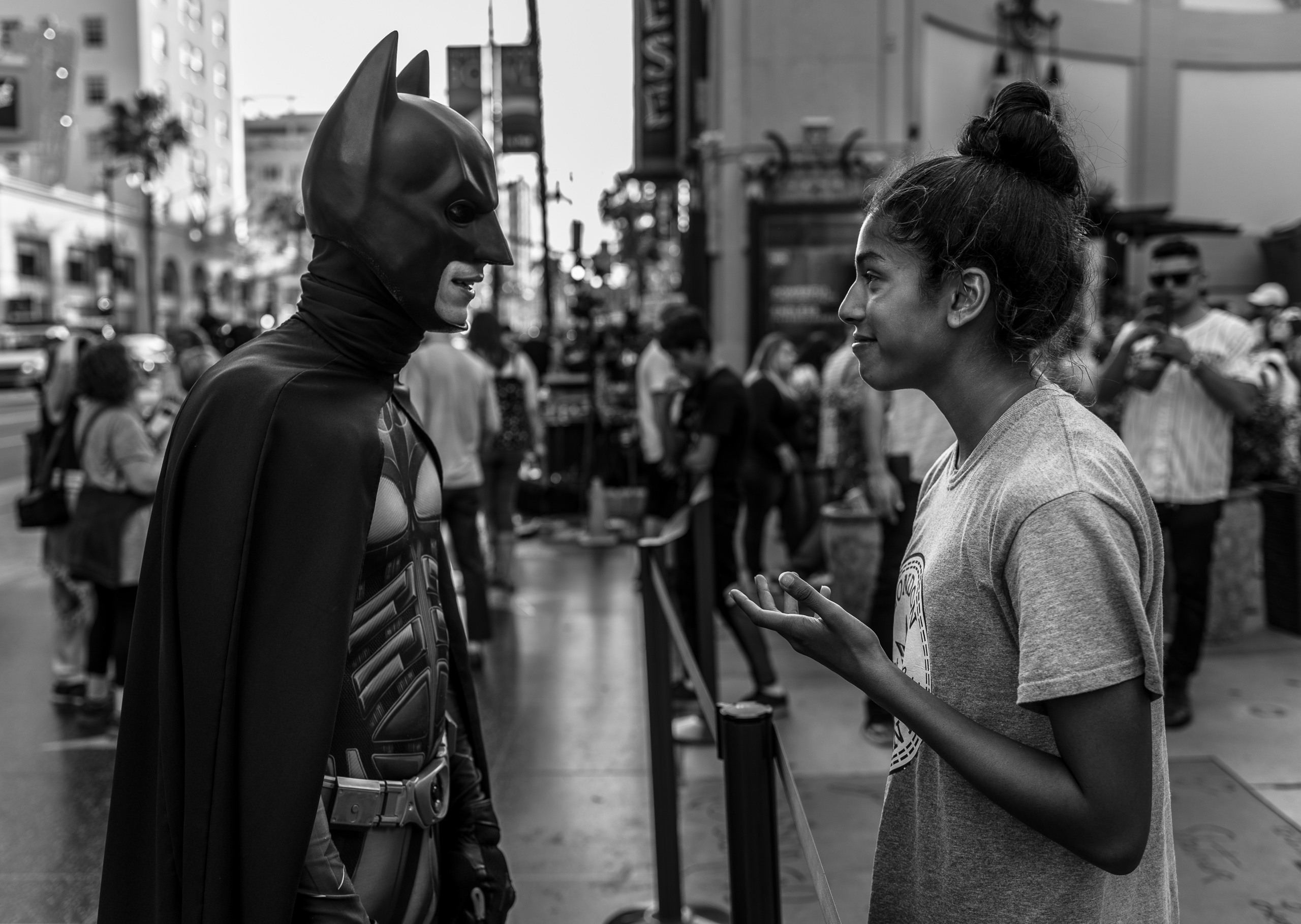 Laptops are horizontal; phones are vertical

Obvious, right? If you’re taking a photo for a laptop, you might want to shoot horizontal. For a phone, vertical.

Landscapes are horizontal; portraits are vertical

Film is Cinemascope; Television is Closeup

From Academy Aspect Ratio, to Cinemascope, to Ultra Panavision, film formats have grown ever more horizontal, ever more widescreen. Television, the small screen, tended to feature close-up images since historically TV screens were much smaller.

Scale is as important in photography as aspect ratio. A closeup of a person or a donut that looks great on Instagram might be boring blown up to a 40″x60″ print. And conversely, a busy scene of people interacting or dancers filling a stage that is vibrant and breathtaking in that 40″x60″ print, might be chaotic, lacking focus, and uninteresting on Instagram. 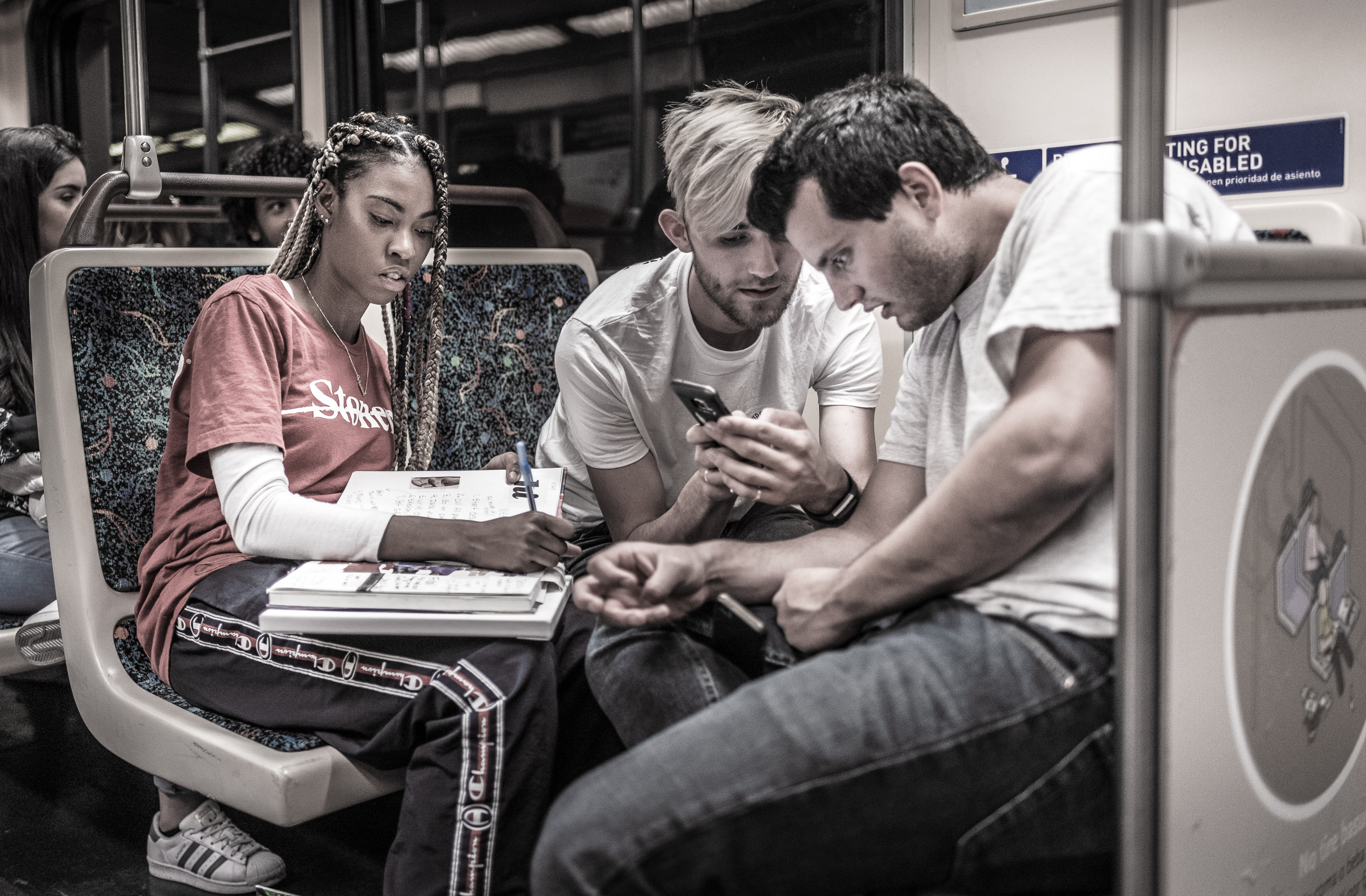 This one is obviously personal opinion, but for me, Street Photography is about landscapes. Landscapes of People! It’s all about the people for me, but it’s not so much about portraiture as it is about people interacting. Usually, people interacting with other people. A person interacting with an environment would also tend to be a landscape for me. In another photographic genre, we’d call that an Environmental Portrait. A portrait-portrait, a headshot, might well be vertical. But an environmental portrait, a person in a scene, feels landscape for me. 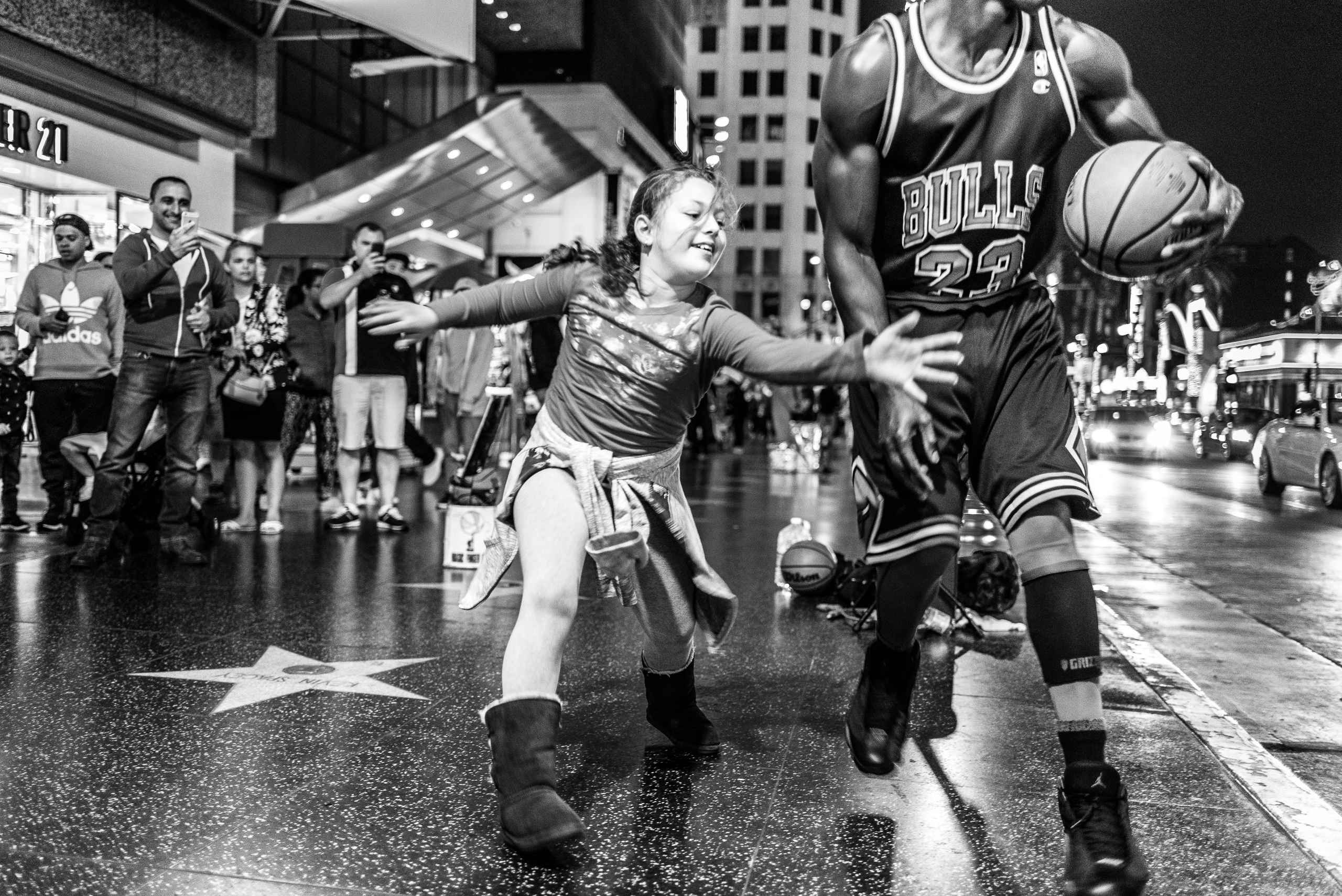 If I’d shot this image vertically, I could have had “Michael Jordan’s” head in the photo. But that’s less important to me than capturing the Streetscape of a young girl trying to go 1-on-1 with a towering basketball player as a crowd of people look on smiling, and cars pace down the boulevard.

If you asked me to shoot a headshot for you, I might shoot it vertical. But for almost everything else, I shoot horizontal. For all the reasons above: 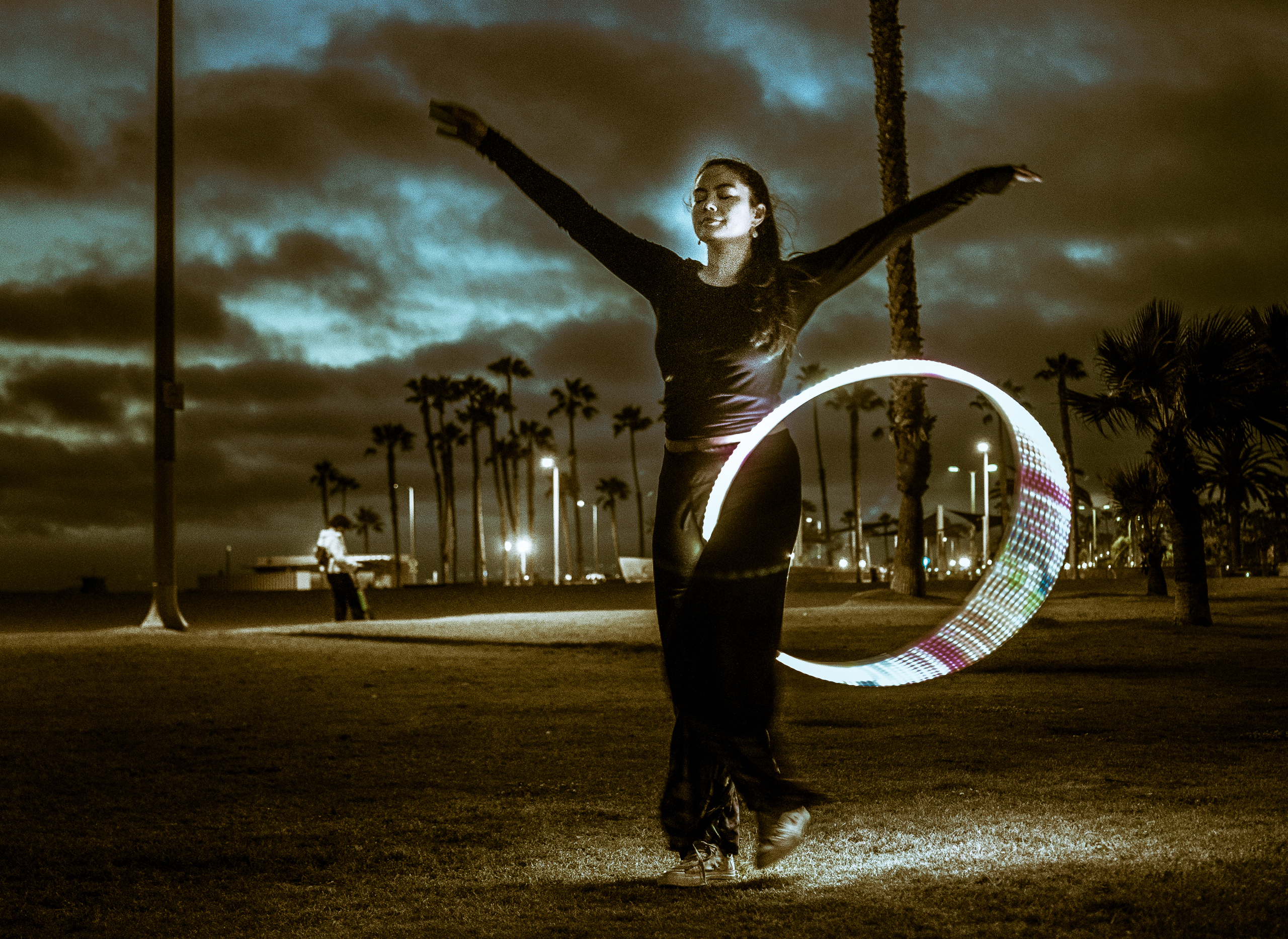 This acrobat doesn’t happen to be interacting with other people. But for me, it’s still a streetscape, still an environtal portrait. Even with only one person in the frame, it’s still an image of interaction with, or presence in, an environment. It is also a horizontal iamge that can be easily cropped into a 5:4 vertical for presenting on Instagram.

100 times more people will see my work on IG than will ever make it here to my website. Instagram, at least this week, is the new Town Square. But it’s still nice, still important, to have a Painter’s Studio, or Writer’s Studio, or Pamphleteer’s Workshop, to work through and refine the bits that eventually make it to the marketplace of ideas that is that town square. For me, that Studio or Workshop is my website (this website). So I shoot horizontal for this website.

Instagram was born a square, 1:1, format. But today you can post glorious 5:4 vertical images there. That 25% larger IG image on a small phone is dramatic! You can also post ridiculously tiny horizontals on IG, don’t ask me why you’d want to. If there’s a horizontal image on this website that I really love, but that can’t be cropped to a 5:4 vertical, then it won’t be posted on IG. Which is fine. 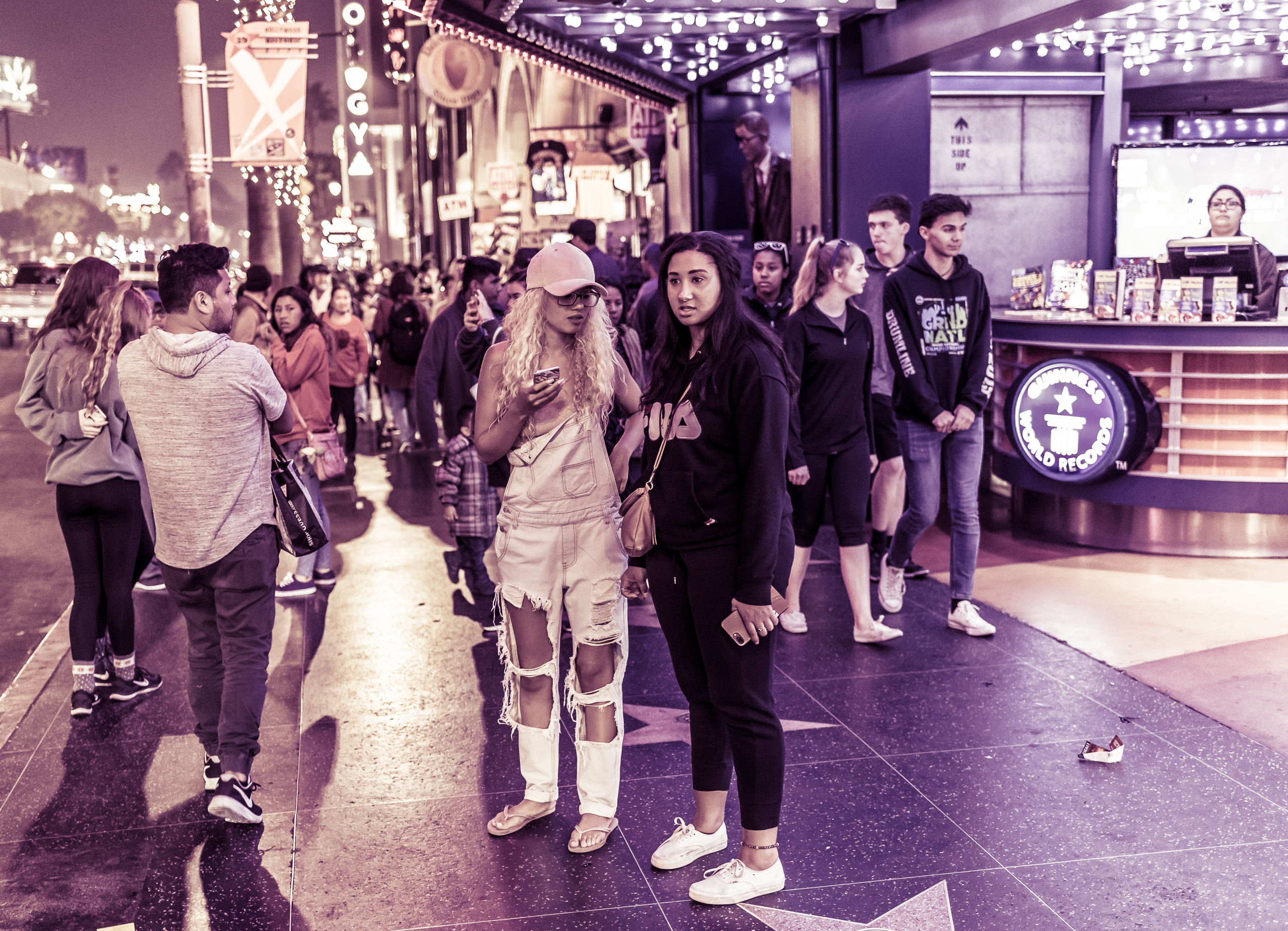 I’ve never posted this image on Instagram. I don’t think it would be that interesting there. Not enough focus. Not exciting or unique enough. But I love seeing it here on the website, or on the 65″ picture frame in my studio. The two friends in the center, one with the very ripped overalls and beach hair flowing out from a baseball cap, both with phones in hand, they seem to be debating what to do next. It’s a quiet moment in a busy space. All the craziness of the people and cars of Hollywood Boulevard, the cashier waiting at the entrance to the tourist attraction, and the two friends pondering for a moment, “I don’t know, what do you want to do?”