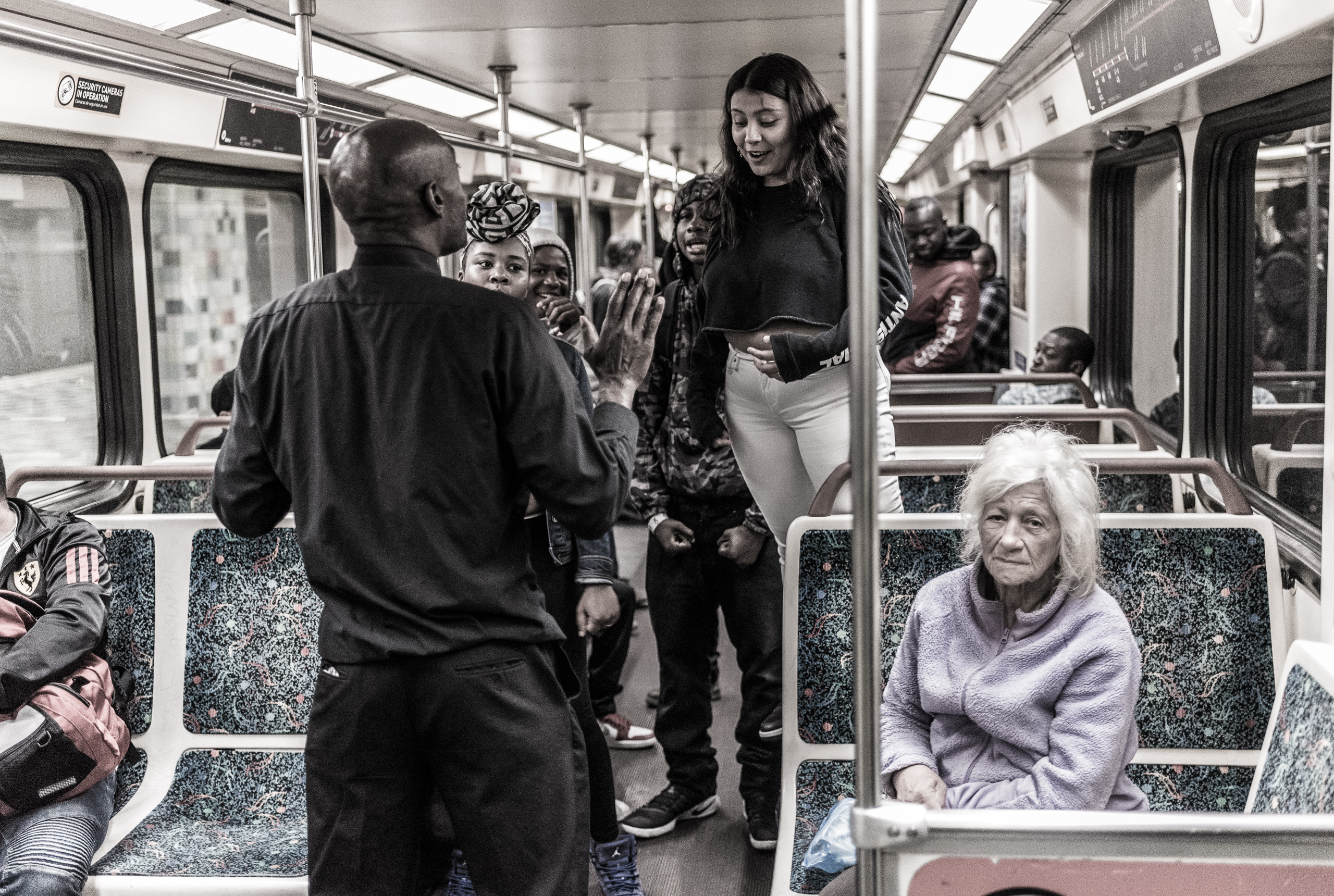 The Kids and I got on the Downtown-bound Red Line at Hollywood & Highland. Mister Tibbs & The Old Lady were already on the train. Most of the kids grabbed seats behind Mister Tibbs and The Old Lady. One boy couldn’t decide where to sit and in order to face his friends, he sat on a corner of The Old Lady’s seat and faced back toward his friends.

I guess it was technically started by The Kids since the boy sat in part of The Old Lady’s seat. From there, there were small aggressions alternately from The Old Lady or from The Kids. A few seconds of aggression would alternate with a few seconds of distraction. The Kids smiled a bit, or laughed a bit, though most of this. So it simultaneously felt light, and like it could easily and quickly escalate into something more violent.

The dispute was essentially over nothing. Or over respect. Which, unfortunately, is not nothing. The Older Girl probably used the word bitch a few hundred times between Hollywood & Highland and Union Station.

After things had escalated a bit, Mister Tibbs said,

It continued on-and-off for another stop or so. Finally, The Older Girl, who was in the seat behind The Old Lady at the time, smacked The Old Lady across the back of her head with a long, slender, pink wallet. At this point Mister Tibbs got out of his seat and positioned himself between The Kids and The Old Lady. He tried to tell them to forget about it. To leave her alone.

Maybe he thought that because he was Black, the kids might pay him some mind. Maybe I thought that. We were wrong. They were more aggressive toward him than they had been toward The Old Lady. It came down to a confrontation between Mister Tibbs and The Older Girl.

Mister Tibbs
I won’t let you hurt her.

The Older Girl
I dare you to touch me!

The Older Girl kept moving into Mister Tibbs. He kept backing up. I don’t think they ever physically touched, but they were very, very close.

When the train pulled into the Hollywood & Western Station, two Metro Police came onto the train and took Mister Tibbs off the train. That encounter only took a minute or less. It happened fast enough that I presume the train driver saw the events on a monitor and radioed the Metro Police. Unfortunately, they removed the one person who was, unsuccessfully, trying to de-escalate the situation. The cops never looked at, or said anything to, The Kids or The Old Lady. They detained the hero, and let the conflict go on unchecked.

Mister Tibbs put himself in harm’s way. He put himself between two groups, neither of which was ever going to say thank you to him.

After Hollywood & Western, it stayed about the same. There weren’t any more purse slaps. But bitch was used another hundred times in various sentences. I think there might have been an in-your-face finger point from The Old Lady, and a finger slap from one of the kids. The four boys got off the train at Pershing Square. One of them spat at The Old Lady as he got off the train. The two girls and The Old Lady stayed on 2 more stops till Union Station.

After the train left the Hollywood & Western station, I realized that I should have also gotten off at Hollywood & Western, to corroborate Mister Tibbs story. He was well dressed, wore a tie, and spoke articulately, so I hope everything was easily and quickly explained. Then again, he was a Black Man being detained by two White Cops in America.

PreviousPrevious post: Take one just of me, 11:10pm
NextNext post:Catch that train! 6:37pm