I believe that most people are better served by being more public. But I also know that The Internet can be an ugly place. Especially if you happen to be female. Everyone will find their own, best solution, but let’s look at ways you can avoid as much harassment as possible, while still leveraging the power of cyberspace to share your work as effectively as possible.

Is there a way we can use IG for its strengths but avoid the problems?

For many of you the solution is to have a Private Instagram. That is a solution, but it’s not so helpful for an artist trying to connect with others and share their work. Here are a few strategies that might work for you:

I hope that by having a Professional IG, you’ll manage to avoid Internet Trolls. I’m optimistic! But if you do get rude comments: 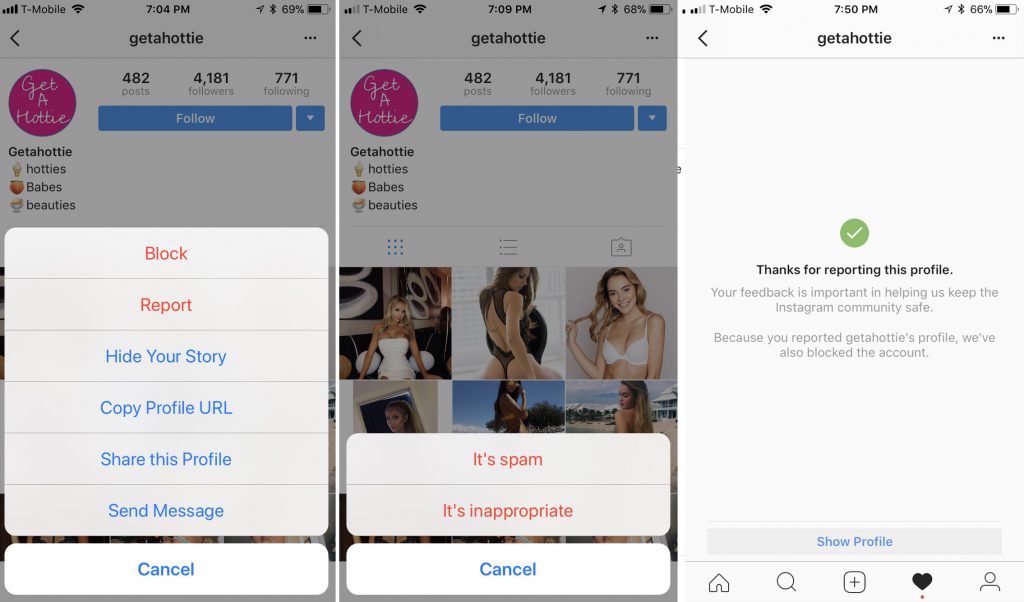 That’s not bad, right? Just block, delete, and move on.

The Whole Rest of The Web

It’s not just Instagram. And IG isn’t the worst. But because IG can be so relevant for us, it’s a place that we struggle with spam and trolls, with public and private.

Take a similar approach to any other platforms you use. I haven’t heard of anything like this happening on LinkedIn, but if it ever does: block, delete and move on.

I think of Facebook as the new phone book. It isn’t exciting the way it once was, but more than any other platform, it’s where everybody is.

There’s actually a fancy Internet sociology term for this, Context Collapse. In the past you could speak differently to different audiences: you might be respectful with your family, you might cuss with your friends, and you’d have yet another form of speech at work and with colleagues. Politicians have done this for years, adopting a slight Southern accent, or a New England accent, as they travel to different parts of America.

You talking with your friends, or a politician campaigning in Alabama, is a context for speaking. But with the Internet, with Facebook, YouTube, etc, there is no context. Your whole family, or the whole country, etc, can see and hear your speech.

Unlike Instagram, Facebook doesn’t like you having multiple accounts or multiple identities. You can do it, but it might be inconvenient. But what you can do on FB is make different lists. Yes, if you’ve got a lot of contacts on FB it can be a project to set all your lists up, but it’s worth it in the long run.

You could put everything in 2 lists, like Personal and Professional.

and so on. Aside from having to sift through your hundreds or thousands of contacts, it’s pretty easy to do: 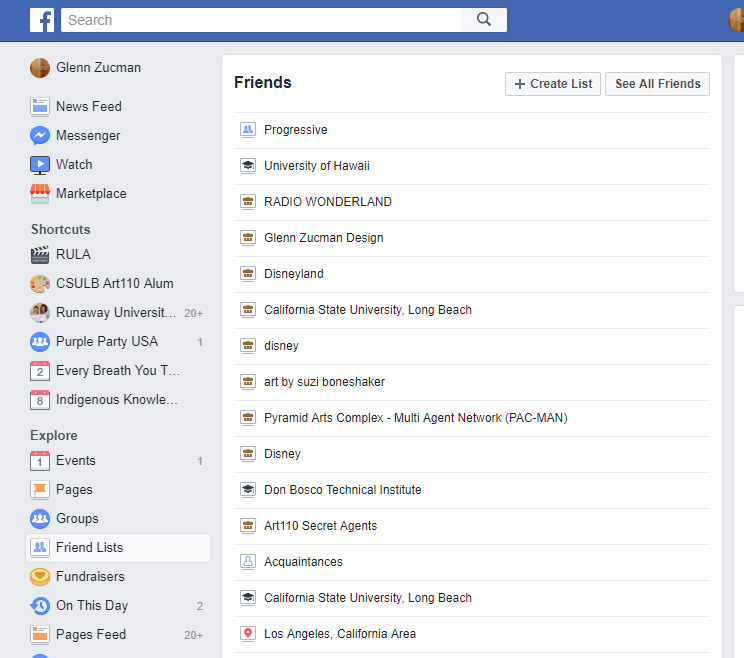 In the image above, there are a few lists I made myself, and a bunch of Facebook autogenerated lists. You can delete the lists you made if you want to, but you can only archive the FB lists. 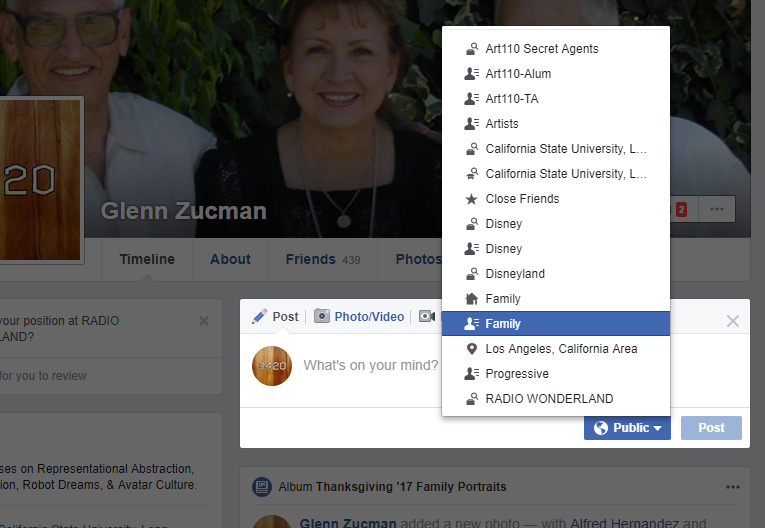 Then when you post to Facebook, just use the “Public” dropdown to select the list you want your post to go to. if you click “More” a couple of times, Facebook will let you select who to send to from all your lists. This should go a long way toward giving you back the context you lost. This is great for getting the right content to the right peeps, but still be careful since it’s easy to accidentally show the wrong thing to the wrong person.

Some of your portfolio platforms will give you the option of turning comments on. This is more common on a “blog” page than on a “portfolio” page, but some platforms will provide comments anywhere you like.

Some platforms have a turn comments off in 14 days option. The idea is that when the post is new you might get legitimate comments, but that later it will mostly just be spambots leaving junk comments. I use Akismet spam filtering on my WordPress websites and it’s excellent. It takes care of most spam with only a few false positives and false negatives. I personally don’t close comments in 14 days, I leave them open. Mostly nothing happens. But occasionally I’ll get a fantastic comment on an old post, or someone from my past will appear and reconnect.

So far I’ve mostly been discussing how to deal with trolls and bad behavior online. But I want to be clear: I think being public has all kinds of great benefits.

By being public I just mean sharing your art. But in his book Public Parts, author Jeff Jarvis took it a lot further. Among many other topics in the book, Jarvis discusses blogging about his prostate cancer. If there’s anything most of us would keep private, it’s our personal health issues. Especially something like cancer. Or as Jarvis called it, his “malfunctioning penis.”

But Jarvis did decide to blog about his prostate cancer and subsequent treatment. Here’s what happened when he shared:

Because of Jarvis willingness to be public about something most of us would keep private, he learned valuable information improving his treatment. Through early diagnosis, he may have helped save lives. And he helped create community where previously there had only been secrecy and shame.

I’m not asking any of your to make your personal life or health details public. But I do want to suggest that if Jeff Jarvis can do that, then maybe it’s not so hard for us to be upfront and public in presenting our art.

For sure, what to make public and what to keep private is totally your choice. Do what works for you. I do believe that we tend to veer toward privacy. And that most of us are better served by being more public.

In February 2017 the Washington Post added a slogan beneath its masthead for the first time in its 140 year history. From our Governments and Corporations we need much more transparency, and much less secrecy.

For you as an individual, you don’t owe the debt of publicness that governments and corporations do. You make what you want public. You keep what you want private. I just want to encourage you to try being a little more public. 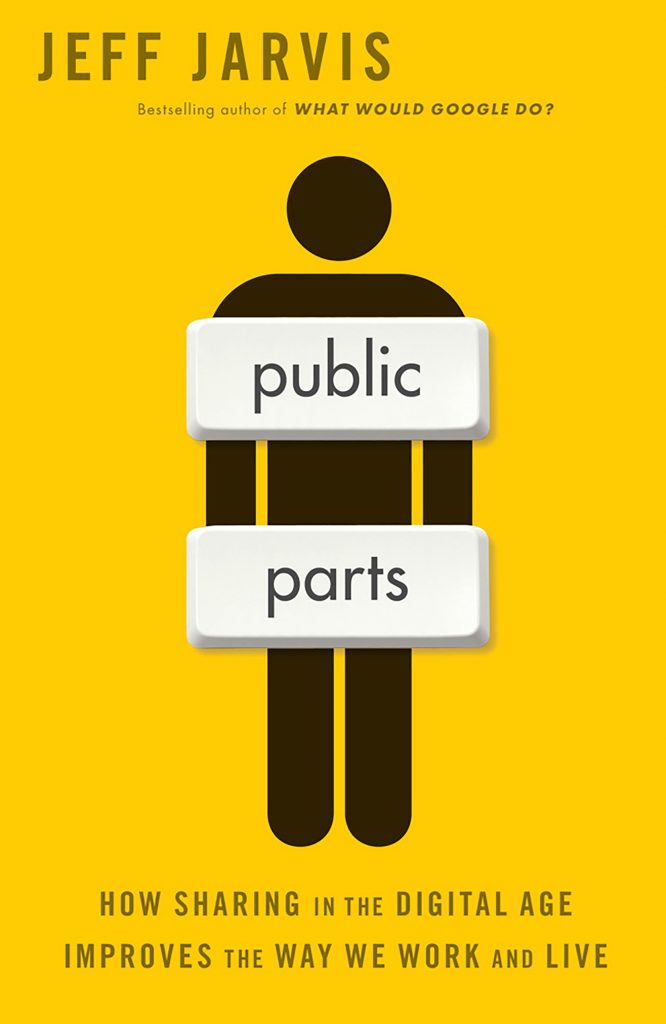